Would you pay £76 for a tube of anti-ageing toothpaste which contains no FLUORIDE? - freetxp Skip to content

Moisturiser. Cleanser. Anti-ageing serum. These are the bathroom products used by millions of Britons in the hope they will keep us looking younger and fresher.

And now it might be time to add another tool to the beauty box: age-defying toothpaste.

Promising to regenerate your smile, this wave of advanced toothpastes wouldn’t look out of place next to pricey face creams – some are even described as elixirs and contain some of the same anti-ageing miracle ingredients, such as hyaluronic acid, which plumps up and irons out the skin. But they come at a cost.

A Mail on Sunday inspection of high-street pharmacies found some of these beautifying toothpastes cost up to £76 a pop. Even Colgate is charging £20 for its latest whitening product.

But can a tube of toothpaste really turn back the clock for your oral health?

Or is it a case of spitting money down the sink?

The claim: With a gold-decorated flat tube, this is billed as the most expensive toothpaste in the world.

Its ‘revolutionary’ formula is made from an extract of the cacao plant called theobromine. Theodent says this has been proven to strengthen crystals in tooth enamel and increase their size by 400 per cent, preventing erosion.

Its formula is said to be just as effective for strengthening tooth enamel, and protecting against erosion, as fluoride. 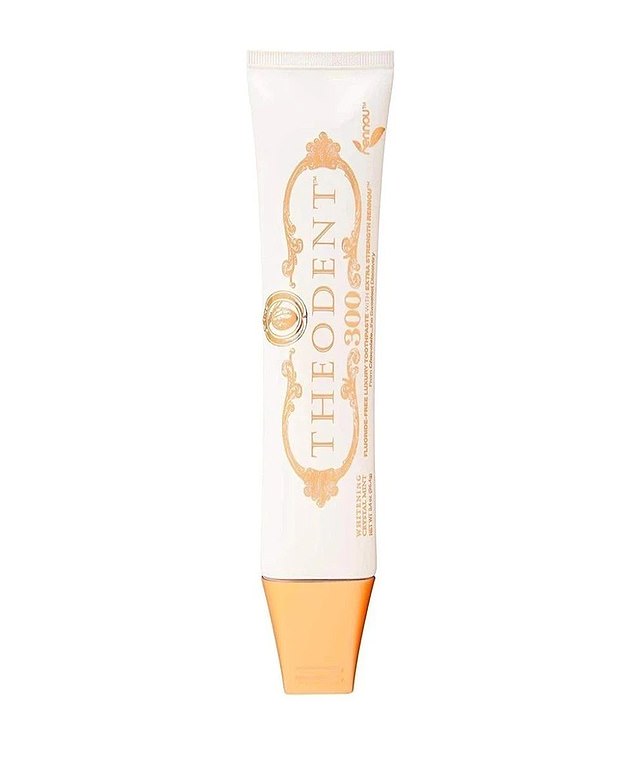 Theodent 300 claims to be able to prevent tooth erosion by protecting enamel. But at £76 a tube, it is the most expensive toothpaste in the world

Verdict: Theodent refer to a number of small studies, carried out by scientists at the University of Texas, to back up claims that its compound can strengthen enamel.

But the studies were not performed on people, say experts, but tested on pieces of tooth which had been removed from the mouth.

Robert Hill, professor of dentistry at Queen Mary University of London, says: ‘A test tube is not the same environment as a mouth. There’s no saliva, which contains salts that can affect how minerals are drawn into the tooth. There may also be residual acid or other compounds swilling around that impact the results.’

‘Whether you spend £1 or £100, fluoride is the most important ingredient in toothpaste,’ says Professor Damien Walmsley, a dental expert from the British Dental Association.

Test: It doesn’t look like any old cheap toothpaste, with a consistency closer to face cream. But the flavor is nothing spectacular – minty with a light aftertaste of chocolate.

The compound occurs naturally in the body to keep lubricated tissues, but is widely used in beauty products for its moisturizing and plumping properties. Colgate say it can beautify the gums, too, making this its first product to protect tooth enamel and gum tissue. The promised ‘healthy smile’ comes from two different types of fluoride – the mineral found in water that protects against tooth decay.

Verdict: Some studies show hyaluronic acid can help slow the development of gum disease. It is thought to ‘plump’ gum tissue, protecting it from invading bacteria.

Even though the ‘elixir’ contains two types of fluoride, it is no more protective than a £2 alternative.

‘This contains stannous fluoride as well as the usual sodium fluoride,’ says Dr Carter. ‘Stannous has extra anti-bacterial properties but you can find both in Pro-Expert Oral-B toothpaste, which costs £2.’

The claim: Whitening toothpastes are not new. Most of the popular products base their claims on the presence of a bleaching ingredient called hydrogen peroxide.

This contains the same compound but with an added bonus: it is ‘enzyme boosted’. The ingredients are said to ‘work in synergy’ to make this product their ‘most effective whitening toothpaste, reversing up to 15 years of discolouration’ in four weeks. 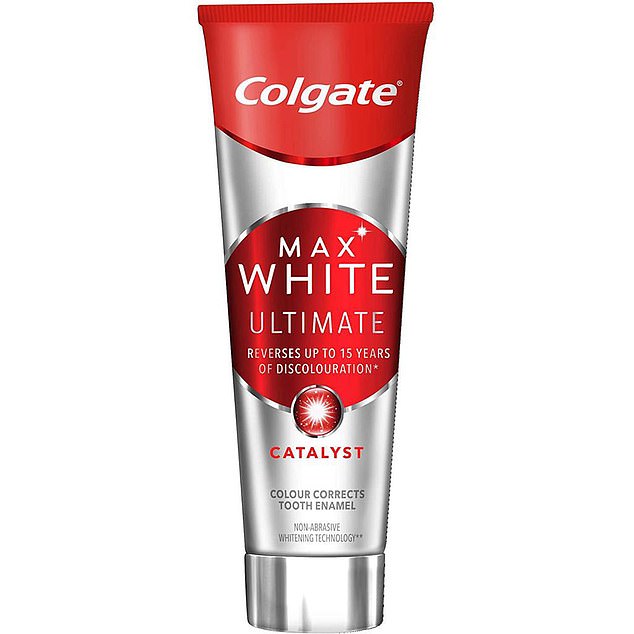 Verdict: ‘The enzyme here is effective at loosening and lifting patches of discolouration from tea or wine,’ says Dr Carter.

‘It is expensive, which explains the price tag. The enzyme works with another ingredient, silica, an abrasive compound that physically sheers off the stain.’

The bleach – hydrogen peroxide – is relatively useless. ‘Products on the high street aren’t legally permitted to be strong enough to change the color of the dentin of the teeth. Most cheap whitening toothpastes contain silica as well as pyrophosphate, which stops coloured residue sticking to the teeth, and prevents plaque,’ says Dr Carter.

‘The addition of this enzyme might mean it lifts marginally more stains, but it might not be worth the price.’

Test: A cool, fresh mint, a bit clinical, like mouthwash at the dentist.

The claim: Most people have some erosion of tooth enamel – over time, acid in the mouth breaks it down. After many years the teeth become thin and the inner-most layer, which is yellow-coloured, begins to show.

This sleek tube claims to turn back time by ‘reversing enamel erosion’ and ‘regenerating’ the minerals that keep the outer layer of healthy and strong teeth. 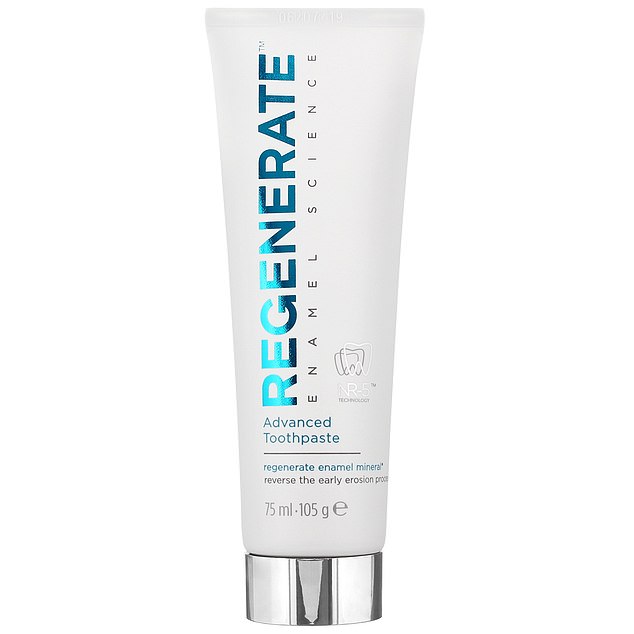 Verdict: Regenerate may be worth forking out for if you have early signs of enamel erosion. The minerals in it, calcium silicate and sodium phosphate, combine to form hard crystals which stick to the teeth and make them hardier.

‘It is not identical to enamel but it is very similar,’ says Dr Carter.

‘It is a bit like putting nail varnish on your tooth but eventually it becomes integrated into it. It is very clever technology.’

Test: It feels thick and claggy but tastes sweet and minty.

The claim: Powdered charcoal is in a host of beauty products, from face masks to lip balms. Curaprox added it to toothpaste for its ‘natural’ anti-bacterial properties. They say the porous texture means it can absorb compounds that stain teeth and bacteria that contributes to gum disease, and that this whitens teeth in a gentler way with no potent peroxides or abrasive silica. 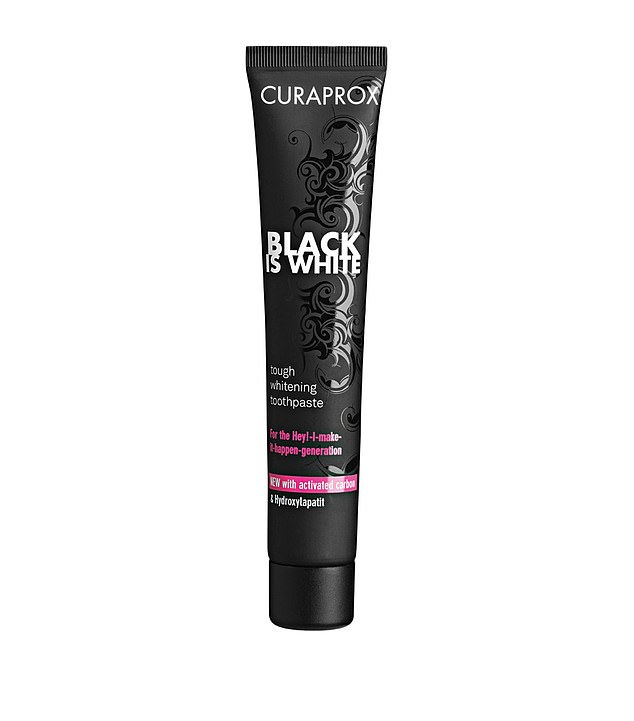 Verdict: Dr Carter says: ‘The teeth look whiter because of the contrast of the black with the white of the teeth. Once you spit out the black gunk, it looks like your teeth are sparkling, but they are not.

‘And you wouldn’t want to put it near a tooth-colored filling. The charcoal could get stuck and look like you have a black outline round the tooth.’