America’s suicide rate has steadily risen over the past two decades, but actually declined in 2020 despite a reported surge in mental health issues faced by the population during the COVID-19 pandemic, a Centers for Disease Control and Prevention (CDC) study finds.

That figure declined in the final years of that period, though. A peak was reached in 2018, with 14.2 of every 100,000 residents dying of suicide, though figures actually declined in 2020 when the began.

While disruptions to every day life and isolation caused by the pandemic led to an increase in mental health issues among Americans, some experts speculate that some government financial relief programs and a feeling of ‘togetherness’ spurred early in Covid prevented some from taking their own lives . 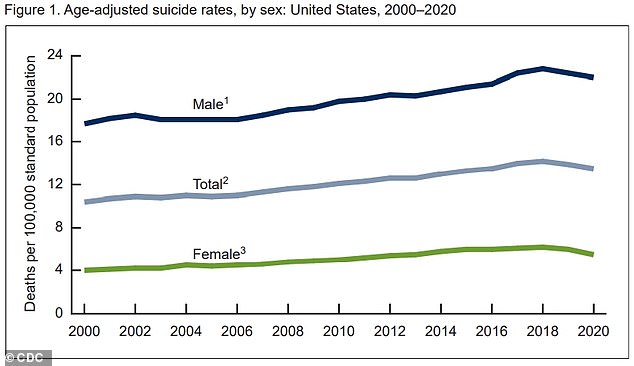 The US’s suicide rate (light blue) grew drastically from 2000 to 2018, before dropping during the pandemic in 2020. Males (dark blue) of all ages are much more likely to die by suicide than women (green), a CDC report finds

The CDC reports that was the 10th leading cause of death in 2019, before dropping to 12th in 2020 because of Covid and rising of liver disease deaths.

Rates then began to rocket upwards, jumping to to 22.4 by 2019, before dropping to 22.0 during the pandemic’s first year.

The drop in 2020 occurred despite the US suffering a health crisis during the pandemic, largely caused by disruptions to every day life suffered in spring 2020.

Mental health especially deteriorated among the nation’s youth, who were forced out of schools and other social events.

These factors did not end up translating into a surge of suicides, though, and instead the pandemic seemed to have the opposite effect.

‘Some of the risk factors for suicide that were heightened by the pandemic – like economic hardship and mental health issues – may have been buffered in the first year by various financial support packages and mental health programs,’ Jane Pirkis, director of the Center for Mental Health at the University of Melbourne, told US News. 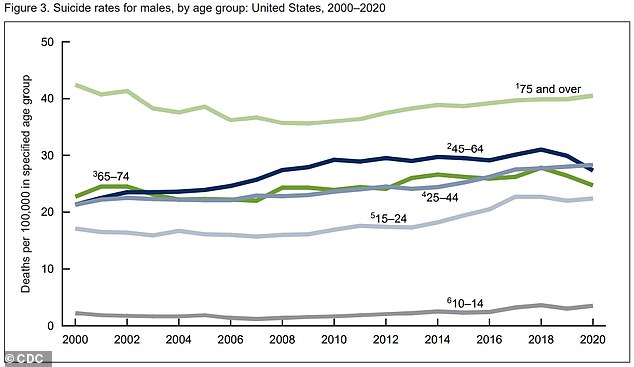 Men aged 75 and older (light green) are most likely to die by suicide. Over the past 20 years, there has also been a sharp increase in suicide rate among men aged 25 to 44 (light blue) and 45 to 64 (dark blue) 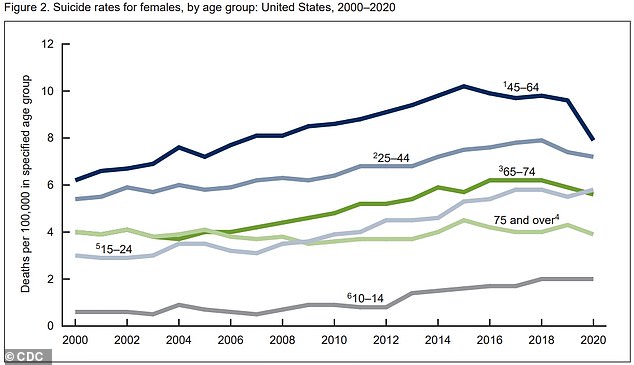 Women aged 45 to 64 (dark blue) are most likely to commit suicide, thought the age groups dropped significantly from 2018 to 2020. There was a sharp increase in suicide rate among women 25 to 44 (light blue) during the study period

Every age group among males grew steadily over the 20 year period, with no individual age group experiencing much of a different increase than others.

The elderly are by far at the highest risk of suicide, with more than 40 of every 100,000 males over the age of 75 taking their own lives every year.

Suicides among the elderly male age group even increase from 2018 to 2020, despite nearly every other age cohort seeing a decline over that two year period.

The American Association for Marriage and Family Therapy, reports that disproportionately high suicide rates among the elderly are often the result of psychiatric disorders.

Social isolation does not seem to be a factor, the organization reports, despite many elderly Americans reporting loneliness. 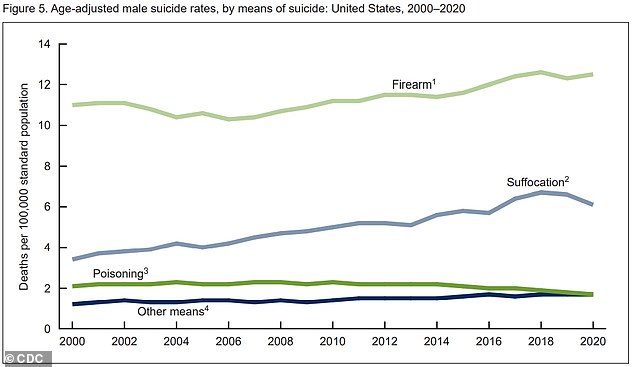 Firearms (light green) are the most common method of suicide among men, no other method comes near the same level of usage 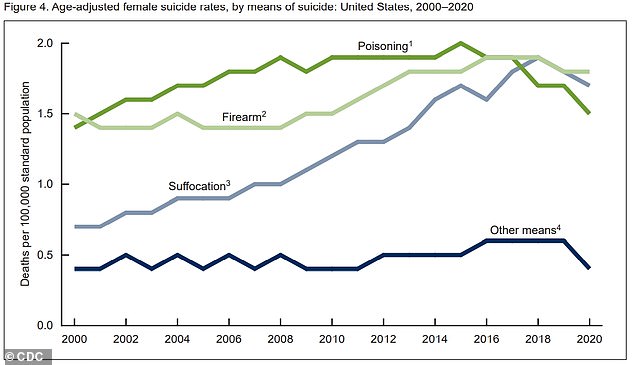 Women are most likely to die by suicide using poison (green) or a firearm (light green). Suffocation (light blue) is a common method of suicide as well.

The rate began to sharply decline in the latter half of the 2010s, though, down to 7.9.

There was an uptick in male suffocation deaths reported during the two decade period, though.

Poison is a common suicide method for women, and was the leading cause for much of the 2000s. Firearm suicides among women equaled poisonings in 2016, before becoming the leading cause of suicide deaths by 2020.

Suffocations have significantly risen as well, now overtaking poisoning as the second leading cause suicide in US women.