Putting a price-cap on cigarettes would limit the number of people who take up smoking, experts say.

Currently tobacco companies get around tax hikes by keeping the cost of cheap cigarettes low while raising those on higher-end products.

It has led to a £5 difference in pack prices, from up to £10 for the cheapest ones made by Benson and Hedges to £14.65 for its Gold range.

The researchers said the maximum price would drive up the price of all cigarettes, they said, rather than just expensive ones, and put off customers.

‘It would also change the profit incentive behind the sale of these deadly products,’ the Bath University experts added.

The team hope the policy will form part of the Government’s plan to make England ‘smoke-free’ by 2030 — a goal campaigners warn it is already on track to miss.

Britain already has some of the highest taxes on smoking in the world, accounting for about 80 per cent of the cost of a pack of cigarettes. For comparison, in the US about 15 per cent of a pack’s price is due to tax.

Smoking rates fell rapidly in the UK during the 1980s and 1990s as the health risks became widely known. But in recent years this has slowed, with about 13 per cent, or 5.5million, adults still regular smokers. 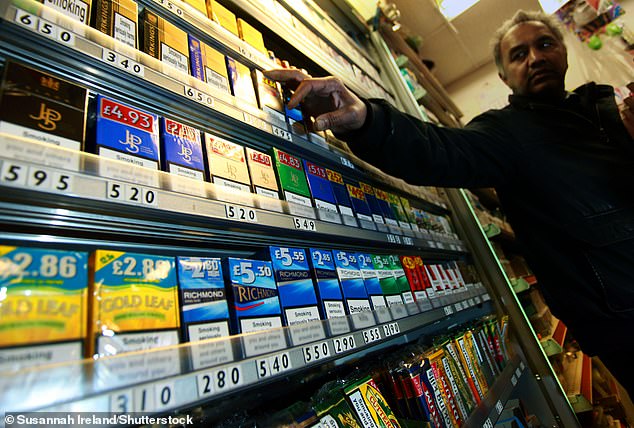 Bath University researchers have called for a price-cap on cigarettes. They say it would help to reduce the number of smokers by driving up the costs

The Bath University researchers say a price-cap should be imposed covering just production costs, with taxes and sales expenses added on top.

They did not say what the cap should be set at.

The UK Government’s strategy so far has been to impose general tax rises.

He told MailOnline: ‘The problem is companies don’t pass on the taxes in a uniform way between the cheapest brands and most expensive.

‘That basically allows them to keep cheap tobacco on the market.’

‘If we take away the profits then these companies lose the incentive,’ Dr Branson said. 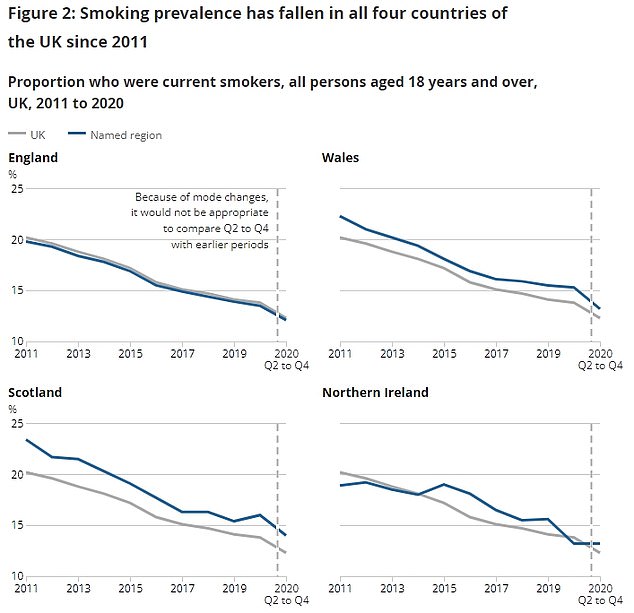 Pictured above is the proportion of people smoking in England, Wales, Scotland and Northern Ireland since 2011. It has dropped in all four UK nations over the last decade

Smoking rates in Britain continued to fall last year, according to official data released before Christmas.

An Office for National Statistics (ONS) report showed usage dropped from 15.8 per cent in 2019 to 14.5 per cent last year.

This is the equivalent of 7.6million over-16s, down from a high of just under 27million in the 1970s, when half of all adults engaged in the habit.

Rates have consistently dropped over the past two decades, with officials declaring the end of smoking to finally be ‘in sight’.

England is aiming to go completely smoke-free by 2030, with No10 having already introduced a raft of policies to curb rates.

Government advisers even called for smoking to be banned on pavements outside pubs and restaurants earlier this year — although the plans were ditched by No10, which sources say felt it had ‘enough on its plate’ at the time.

Some studies had suggested Covid lockdowns and the stresses of coping with the pandemic would trigger a rise in the number of smokers in Britain.

But two datasets published by the ONS today debunk the concerns, showing the opposite to be true.

‘Wouldn’t it be a lot better if this money instead went to the Government to help fight smoking.’

In the paper, Dr Branson said a smoking regulator should be set up to impose the price-caps.

He suggested these could be lowered if a tobacco company continued to charge below the level.

Campaign groups backed his calls today saying it would stop tobacco companies passing the costs on to smokers.

Deborah Arnott, chief executive of anti-smoking group Action on Smoking and Health (ASH), said: ‘These proposals are all supported by ASH, doctors organizations and health charities.

‘That way tobacco manufacturers can be forced to fund the support smokers need to stop, rather than the passing cost on to smokers, which is what happens with tobacco taxes.’

But Simon Clark, from pro-smoking lobby group Forest, warned a price-cap would be an ‘attack on consumer choice’.

‘Worse, it would almost certainly lead to further increases in the cost of lower priced brands.

‘This would not only discriminate against smokers who are less well off, it could drive many more consumers to the unregulated black market where criminal gangs will sell cigarettes to anyone, including children.’

Previous research from the same team at the University of Bath found that roll-your-own tobacco is taxed at lower rates than factory made cigarettes.

The World Health Organization has raised concerns about the methods used by tobacco companies to counter tax rises, such as over-producing before a tax increase, subtly changing a product’s weight or size so that it falls into a lower tax bracket or using price promotions like discounts.

The researchers said tobacco companies in the UK had kept price-sensitive customers by shrinking pack sizes.

Smoking cigarettes increases the risk of suffering strokes as well as other conditions including cancer and heart disease.