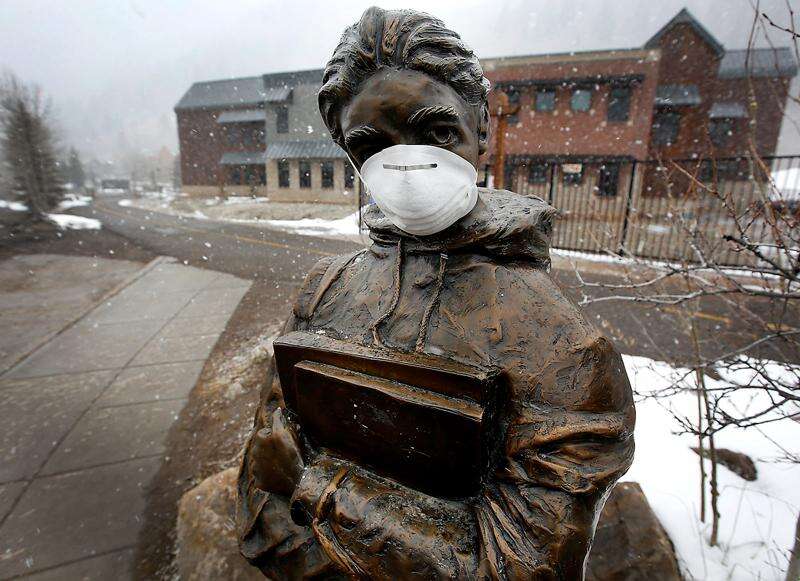 A statue wears a mask in Mountain Village in March 2020. Following the guidance of the Centers for Disease Control and Prevention, San Juan Basin Public Health updated its public health advisory Tuesday. The general public is no longer advised to wear a mask indoors in public when La Plata and Archuleta counties are classified as low or medium risk, according to the CDC’s COVID-19 community levels metric. Both counties are currently at medium risk. (Jerry McBride/Durango Herald file)

Many La Plata and Archuleta counties residents can now leave their masks at home.

The update paved the way for the relaxing of mask wearing in La Plata and Archuleta counties when the CDC downgraded both counties from “high” to “medium” Thursday. As cases continue to decrease, SJBPH and the state of Colorado are transitioning to a new phase of the coronavirus pandemic in which COVID-19 is normalized.

“We’re headed in the right direction,” said Chandler Griffin, spokesperson for SJBPH. “We are trying to turn the corner’rely following the science (and) the data.”

When La Plata and Archuleta counties are listed as low or medium risk by the CDC, the general public is no longer advised to wear a mask when indoors in public spaces.

At medium, SJBPH advises vulnerable people at risk of severe disease and their family members to wear masks when inside public spaces.

If the community levels hit high risk, the agency encourages everyone to return to wearing masks inside in public.

SJBPH continues to recommend vaccinations, including booster shots, and testing if symptomatic no matter the level.

The CDC released its community levels metric on Feb. 25 as the agency sought to relax masking rules amid the downward trend in COVID-19 cases. In a change, the new metric relies on hospital admissions, hospital capacity and new case rates when evaluating the COVID-19 risk in communities.

“Up until this time, the CDC’s recommendations for community precautions, including masking, was based on case counts or transmission rates within a community,” said Liane Jollon, executive director of SJBPH.

“At this point in the pandemic, we have such better tools,” she said. “… With vaccination as well as early treatments, case count is not necessarily the strongest indicator of how many people will require hospitalization in a community, so the CDC has taken this into account in releasing these new community risk levels.”

When SJBPH first announced its revised public health advisory on Tuesday, the CDC classified both La Plata and Archuleta counties as high risk.

But when the CDC updated nationwide levels on Thursday, both were downgraded to medium, indicating that many residents could safely stop wearing masks.

It marked the first time since April 2020 that local mask orders or advisories were not in effect communitywide, Griffin said.

“We’re pleased to see our communities moving down to the CDC’s medium level. We’ve all worked really hard together to achieve this by limiting severe illness and transmission through vaccination and precautions,” Jollon said in a Thursday news release.

But she urged La Plata and Archuleta residents to not ditch their masks completely.

“We should also keep our masks available if we’re asked to put one on, such as when entering a health care setting or using transportation where it’s required,” Jollon said in the release.

According to the CDC’s most recent community levels update, the majority of Colorado has been classified as low risk. Of Colorado’s 64 counties, 17 were designated medium risk and four remained high risk.

Cases across the state continue to plummet, and Gov. Jared Polis has encouraged Coloradans to return to their pre-pandemic lives as the state moves to normalize COVID-19.

The same day the CDC released its community levels, he announced his administration’s plan to transition to a new phase of the pandemic.

In a Feb. 25 news conference, Polis celebrated a return to normal life, essentially marking the end of the pandemic in Colorado.

“Today I’m here to say it’s time for us to turn the page and start a new chapter,” he said. “… It is time to acknowledge that we’ve reached a point in Colorado where Coloradans who are fully vaccinated can freely live without undue fear.”

“Live your life, don’t feel guilty. You only live once,” he said.

The Polis administration’s plan, “Colorado’s Next Chapter: Our Roadmap to Moving Forward,” outlines steps the state will take as it shifts its response, including expanding Colorado’s health care workforce, moving COVID-19 testing and treatment into doctors’ offices and hospitals, and lobbying the federal government for a comprehensive national pandemic plan.

“Due to large-scale immunity and the availability of tools to mitigate the spread and severity of disease, the administration is shifting away from population-level strategies used to suppress transmission and prevent widespread disruption and significant strain on our health care system,” the Polis administration wrote in a news release. “As the pandemic phase of this response recedes into a more endemic response, the state will continue to operate in a state of readiness, emergency keeping response and public health systems prepared to respond and surge when needed.”

Broad COVID-19 immunity via vaccination or infection has allowed the state and La Plata and Archuleta counties to begin relaxing public health measures that have been in place since the start of the pandemic, Jollon said.

“With the extensive uptake of vaccines in the state of Colorado, including individuals who are fully vaccinated and boosted, as well as the widespread omicron wave has rendered nine out of 10 Coloradans with some immunity to COVID-19,” she said. “When we have that percentage of the population with some immunity, the virus has less opportunity to grow.”

Even as the state and SJBPH ease precautions, residents can still access many COVID-19 resources.

SJBPH is also offering free at-home rapid tests and masks at its offices in Pagosa Springs and Durango, and vaccines remain widely available through the health agency and other medical providers in the area.

Falling cases and hospitalizations continue to encourage Jollon as SJBPH readies its new approach to the pandemic.

“This is really good news,” she said.