Major cities like San Francisco and Chicago are refusing to budge on school mask orders despite the Centers for Disease Control and Prevention (CDC) revising orders last week to remove indoor mask recommendations from both cities and peer-cities like New York opting to remove guidelines in recent days.

San Francisco, a major blue city that has had some of the strictest pandemic measures over the past two years, is currently still not budging on its school mask mandate. The controversial policy remains in place despite Mayor London Breed, a Democrat, and California Gov Gavin Newsom, also a Democrat, both voicing that it is time to lift these types of measures.

San Francisco County is averaging only 300 cases per day at the moment, one of the low points of the past two years and a far fall from the record of around 2,400 cases per day being recorded during the mid-January peak of the Omicron variant.

The city will also soon no longer fall under a state level mandate, with a Newsome announcing Monday that his state with lift masks in schools on March 11. Neighboring Oregon and Washington also announced they would make the same move in a joint statement with Newsom. All three states are under Democratic leadership.

‘If I had my way, I would let kids run around free without masks,’ Breed said in an interview with Yahoo News last week.

Newsom has lifted a statewide mandate for vaccinated residents, starting Tuesday, and has even laid out plans for the Golden State to move on from the ‘pandemic’ in the near future and start treating Covid like an ‘endemic’. The

The San Francisco Department of Health is in charge of making the final decision on masks in schools, though. The agency has been hesitant to lift restrictions despite dropping cases in the city.

‘Masks are still an important prevention tool for now and in the future, and we may need to rely on masks again if we see new surges in cases or new variants,’ Dr Susan Philip, San Francisco health officer, said in a statement.

‘For now, with case rates continuing to drop, this is a safe step in a direction toward fewer restrictions.’

Chicago is emerging as another outlier. While the rest of Illinois has dropped masks from schools, and the Windy City itself has decided to drop vaccine and mask mandates for adults, Chicago Public Schools issued an advisory Monday that children would still have to wear masks in the classroom. 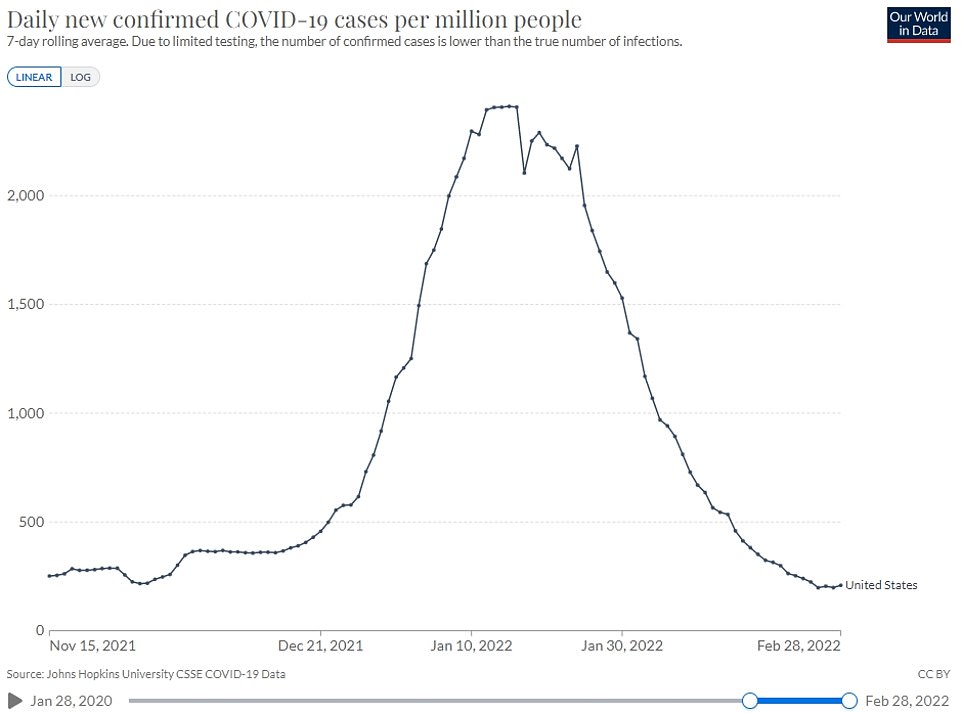 Per revised CDC guidelines, 70% of Americans no longer live under a mask recommendation 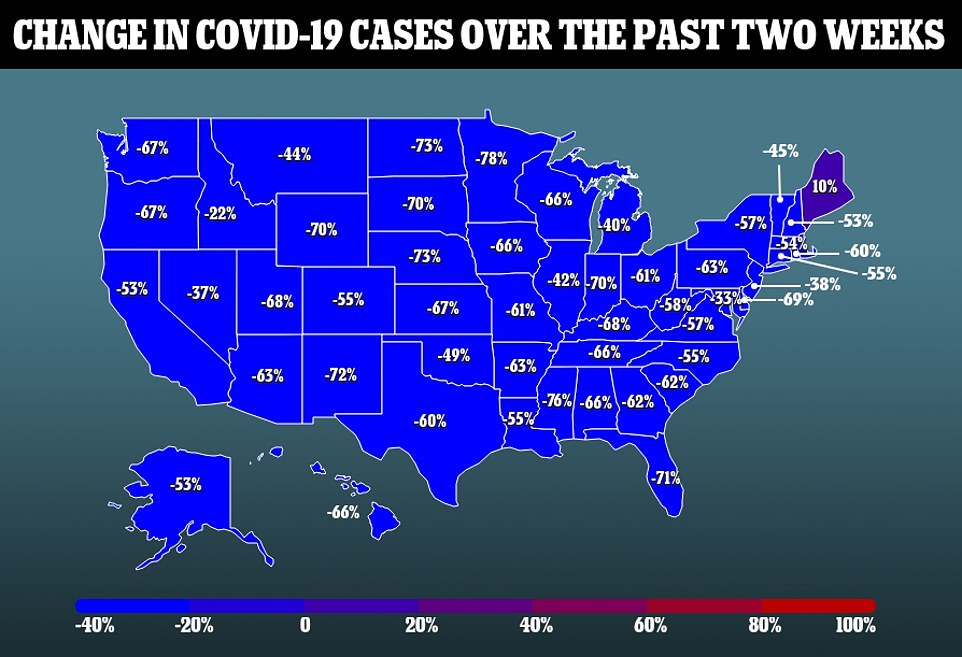 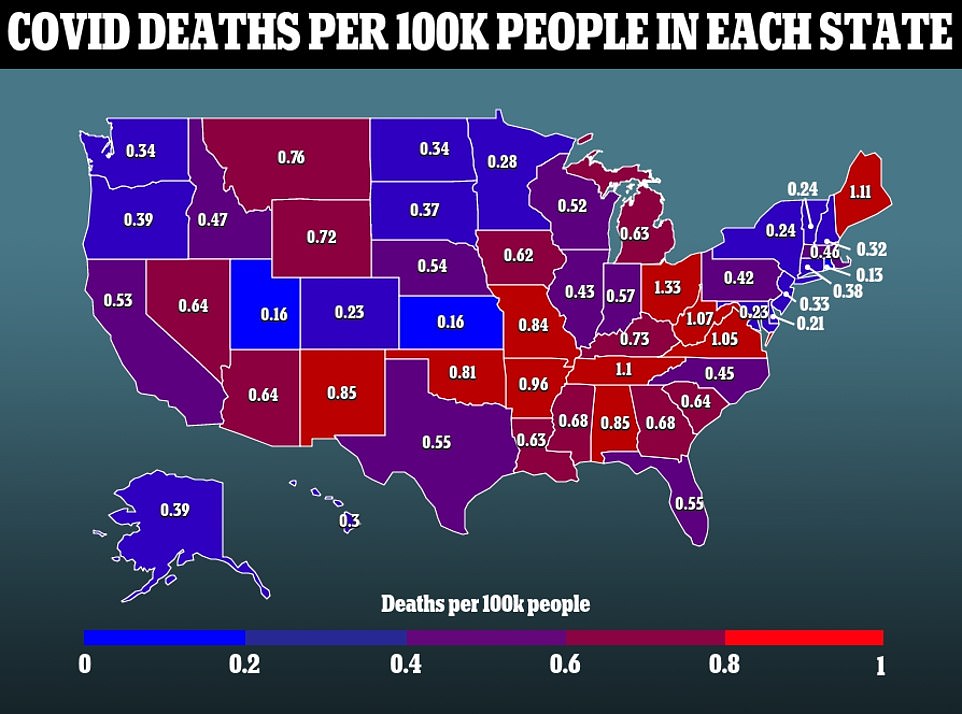 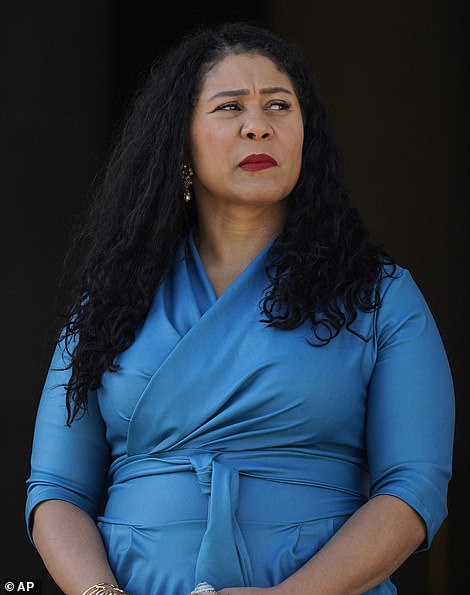 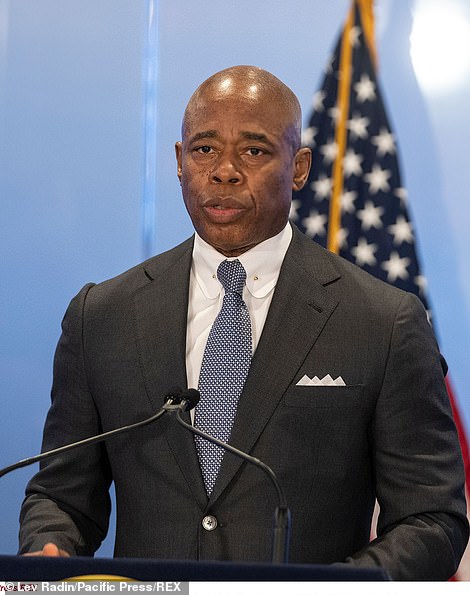 San Francisco Mayor London Breed (left) said ‘If I had my way, I would let kids run around free without masks’ last week, while health officials in her city remain hesitant to lift school mask mandates. New York City Mayor Eric Adams (right) announced Sunday that masks in schools and the city’s vaccine requirements would be lifted on March 7

More pressure is being placed on officials in San Francisco and Chicago, though, as major cities like New York start to leave the pandemic behind.

Eric Adams, mayor of the Big Apple, announced Sunday that the ‘Key2NYC’ program – where New Yorkers as young as five must show proof of vaccination to enter indoor dining, fitness and entertainment venues – and the city’s mask mandate for schools are set to be lifted on March 7.

‘At the end of this week, we will evaluate the numbers and make a final announcement on Friday. If we see no unforeseen spikes and our numbers continue to show a low level of risk, New York City will remove the indoor mask mandate for public school children, effective next Monday, March 7,’ Adams said in a statement. 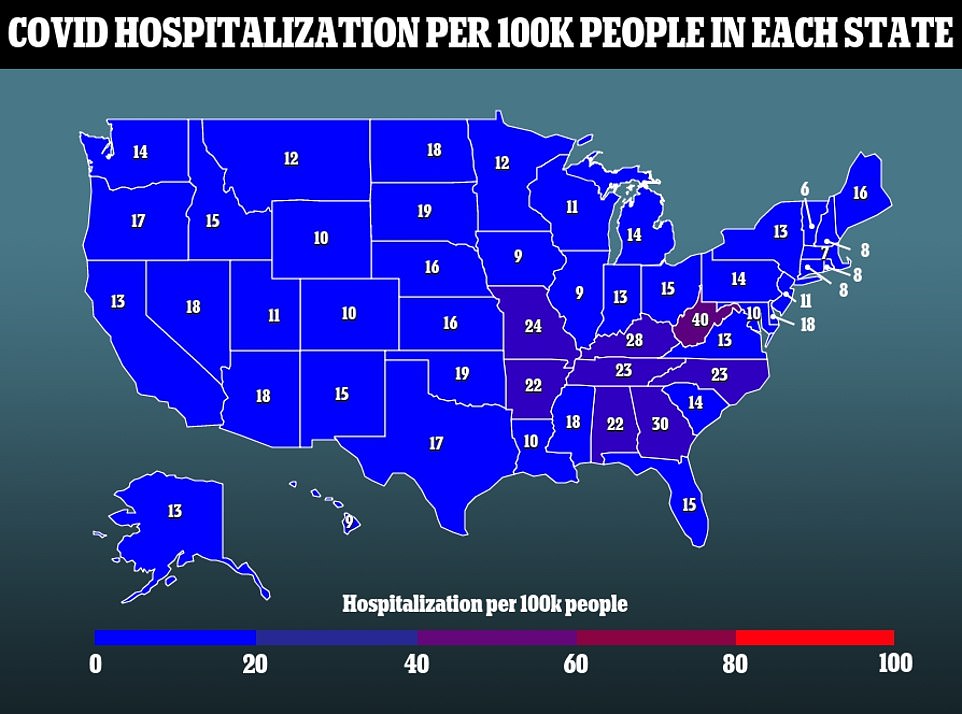 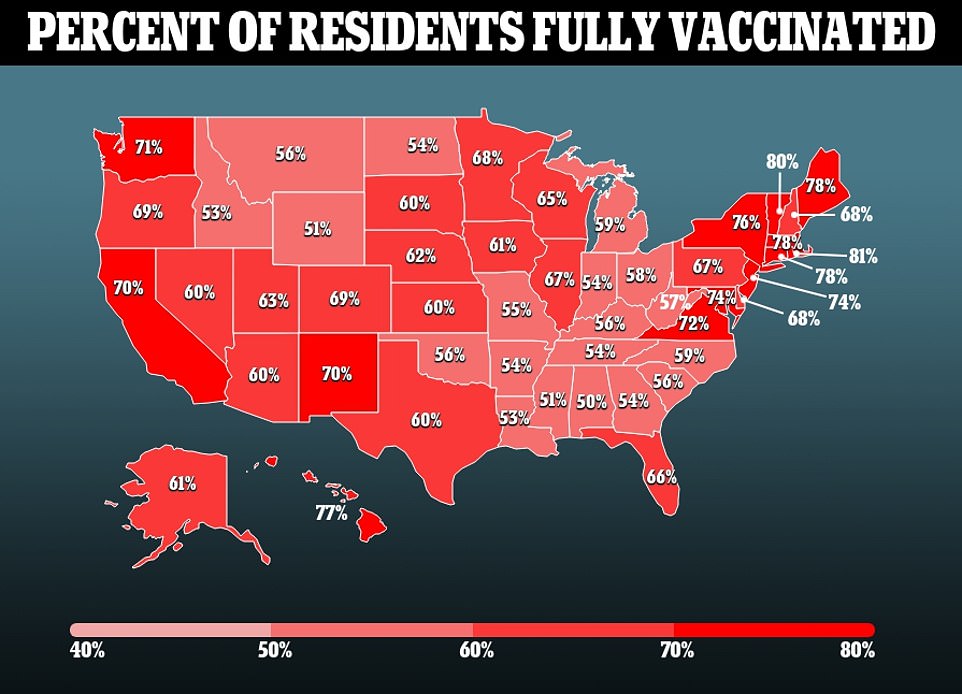 Federal officials finally budged on mask orders Friday as well. After weeks of dragging their feet on changing mask orders, the CDC revised how it calculates Covid risk for each county. Instead of only counting cases, the agency will now heavily weigh hospitalization rate and hospital capacity in each US county.

The CDC had been under pressure in recent weeks to remove mask recommendations due to falling cases nationwide. The agency was slow to move, though, with 49 of the 50 states – Hawaii being the outlier – setting plans to do away with face coverings even before the revised CDC guidelines.

Last weeks move now kicks pressure back to local officials like those in New York, San Francisco and Chicago to lift orders, as now the CDC no longer backs mask mandate in places where hospitalizations are relatively low. None of the three cities are in an area of ​​’high’ risk, per the new CDC guidelines. 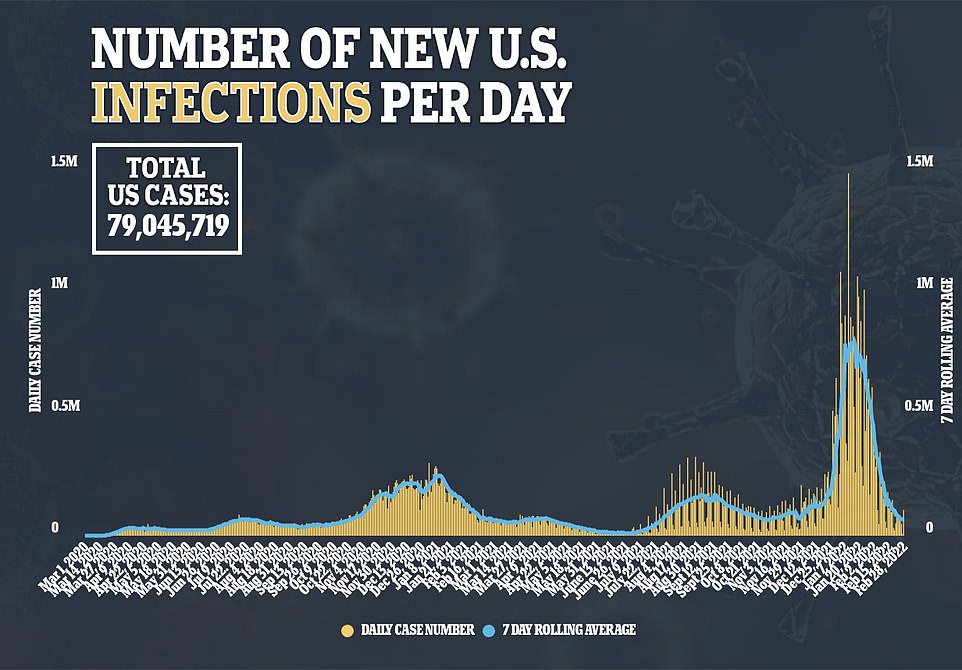 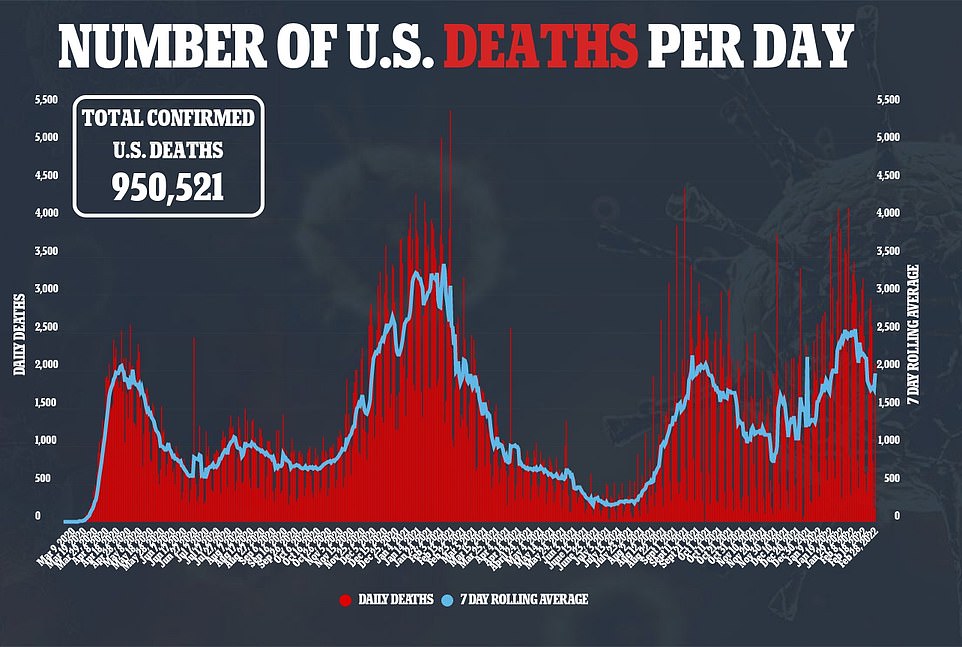