ROBERT HARDMAN: A year on from the Covid battle, it's all about cutting the waiting list - freetxp Skip to content

There was never any chance of embarrassing ‘Partygate’ snaps leaking out of this place. That’s because all Christmas parties were canceled.

No one felt much like celebrating anyway, just as no one has been marking last month’s anniversary here at the Royal Free Hospital in North London.

It is two years since staff began handling Covid-19 — long before most of us had started to think about a strange bug emanating from China.

As the first smattering of Covid cases began to surface in the UK, the staff here received their first infected patient on February 9, 2020. Few have decided to honor the date.

‘I can’t say I’ve been baking a cake,’ says intensive care consultant Amit Adlakha, as he shows me the current state of play on his wards.

I am grimly familiar with the Royal Free’s intensive care unit, for it was this time a year back that the Mail was given exclusive access to the very front of the Covid frontline as a rampant and resurgent virus reached its peak.

The day I spent inside here remains engraved on my mind: row after row of unconscious, desperately sick Covid patients hooked up to ventilators and gasping for air. 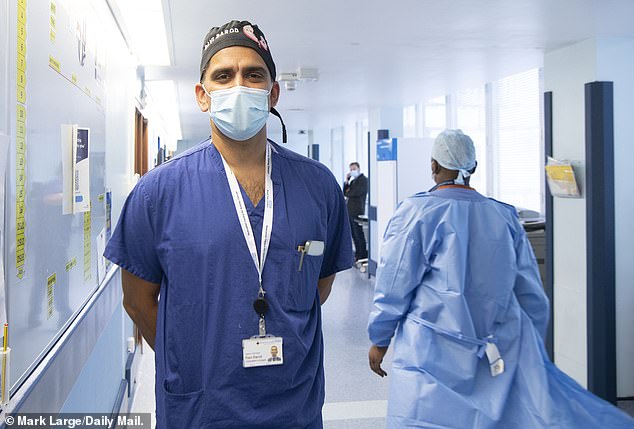 Cancer surgeon Ravi Barod is pictured above. His first action, after every operation, is to call the next of kin. The pandemic, he says, has shown how communication is absolutely key to managing anxiety levels

Double-gloved, double-masked and taped inside my surgical gown, I went through two sets of hermetically sealed doors and into a sci-fi vision of hell.

It was hard to tell one bed from the next, since the space between each berth had been filled with an extra bed, along with requisite machinery and tubing.

Every few moments I had to press myself against a wall as another trolley came crashing through, bringing in a new case or extracting an old one, the lucky cases bound for a recovery suite, the others for the mortuary.

What had already been one of Britain’s largest intensive care units had gone from a 42-bed capacity to 95, almost overnight. There was no day or night in this permanently strip-lit disaster zone.

And that was just the scene in intensive care: on all ten floors, almost every unit in this 500-bed hospital was occupied by someone with severe Covid.

I am delighted to report that the Royal Free looks very different today. I return to what had been one of the worst scenes during my last visit and find that it has gone back to its role as a transit area for people emerging from surgery.

What is most striking, though, is the mood. It’s not one of fatigue or exasperation, as some politicians and union leaders might claim. Rather, there is the sense of a battle-hardened combat unit gearing up for a new mission as the nation reverts to what passes for normality. 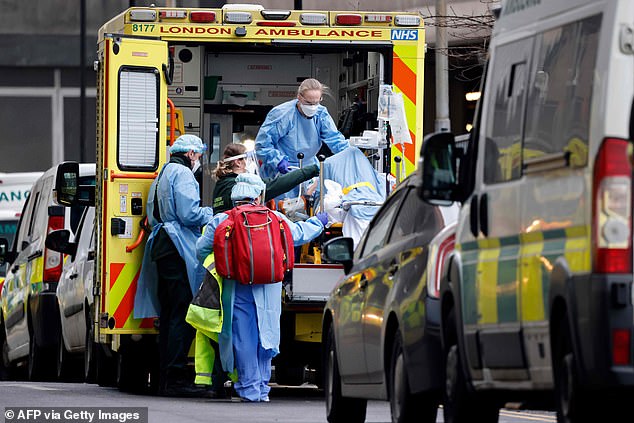 What had already been one of Britain’s largest intensive care units had gone from a 42-bed capacity to 95, almost overnight. There was no day or night in this permanently strip-lit disaster zone. An ambulance is pictured outside the hospital in January 2021

First, that NHS waiting lists are not going down but will inevitably go up before we can return to pre-pandemic norms. But the really big news was the Prime Minister’s lifting of all remaining pandemic restrictions — including the need for Covid-carriers to self-isolate.

These announcements have generated much heat and anger in Parliament and the devolved administrations.

Working my way around the Royal Free, however, I find that no one brings up politics at all. Rather, I find a palpable buzz, a strong sense of professional pride and a recognition that priceless lessons have been learned.

‘My biding memory of this pandemic has been seeing all the staff doing exceptional things, going the extra mile,’ says medical director Gillian Smith.

She says that, overall, waiting lists are 25 per cent up on pre-Covid levels, but that the large majority of these cases are non-life threatening. All the urgent cases, including all forms of cancer (and suspected cancer) have always been ‘prioritised’.

The problem, she concedes, is one that has emanated further back up the system: more new patients turning up at hospital with more advanced symptoms.

Outside his operating theater, I find kidney cancer surgeon Ravi Barod, 45, already on the phone to the family of his latest patient.

His first action, after every operation, is to call the next of kin. The pandemic, he says, has shown how communication is absolutely key to managing anxiety levels.

‘People get really stressed that their operations will be postponed, so we have to keep explaining that they will not be,’ he says.

‘At the start, we reorganised with other hospitals, we broke the lists down into high, medium and low risks and we continued operating all the way through.’

Thanks to a new system of close monitoring for all low-risk cases outcomes, they ensured that clinical were no different from pre-Covid levels. ‘Not a single one of the low-risk cases came to harm,’ says Mr Barod.

One simple response to the backlog, he points out, is by upping the number of weekend appointments. In the breast services department, the senior clinician is Debashis Ghosh.

‘From the start, our view was that Covid will go away but cancer won’t,’ says this unflappable 55-year-old breast and oncoplastic surgeon. After picking up the first warnings about the new virus in 2020, he instantly started making plans, striking a deal with the private King Edward VII Hospital to transfer much of the breast cancer surgery work there.

‘Not a single cancer operation was stopped,’ he says. The problem, he says, was a Government guideline curtailing breast reconstruction operations between March and June 2020.

‘Reconstructions take a lot of time — up to nine hours — and that is where the backlog is,’ he says. ‘It has caused a lot of suffering, but we are getting there.’

Mr Ghosh is untroubled by the removal of all Covid restrictions — ‘We are all going to have to crack on with life at some point’ — and he is optimism about getting the waiting list down over time.

‘We are running Saturday and Sunday lists and money is not an issue. The Government is throwing money at the problem.’

However, he remains fearful of one backlog which has yet to emerge: those who failed to come forward during lockdown. Mr Ghosh says they account for a 50 per cent increase in women presenting with late-stage cancers.

Down in intensive care, respiratory consultant Amit Adlakha, 41, takes me to the separate Covid ward, where the extreme cases are isolated.

The doors are covered with Covid warnings and we have to stop at a ‘doffing’ station to put on extra layers of PPE.

It’s not as oppressive as the umpteen layers I had to wear on my last visit, but it still involves a fitted mask, gown and a visor.

Inside, things are positively spacious these days. There are 13 beds in this isolation ward, of which nine are occupied. Except for one, all the patients are unconscious and on ventilators (one of them is only in his 30s).

The most depressing thing about it is that seven of the nine cases are people who, for whatever reason, have not had Covid jabs.

Every patient coming in for elective surgery will be pre-tested for Covid. If they are positive, their treatment will be rearranged.

Some cases, however, simply cannot wait, like those in Eabha Rice’s cardiology and coronary unit. At 26, she is a senior ward sister with 27 cases, ranging from chest pains to serious heart attacks. Two of her current patients turned out, on arrival, to have Covid and were kept in isolation in separate (en suite) rooms.

I put on PPE to meet one of them, Mohammed Asif, 64, from Kingsbury, North London. He has no Covid symptoms (he has had his jabs) and is alert, busily calling round his family.

He has nothing but praise for Eabha Rice and the staff now preparing him for a heart bypass operation.

All the patients I meet have been bowled over by the speed with which they have been treated.

In the post-operative section of the high dependency unit, Janet

Huggett, 77, is coming round from surgery to remove suspected cancerous cells from her stomach. Despite Covid, this is her fifth — and most serious — procedure inside a year.

‘My prayers have been answered,’ she says, but she is all too aware of the iniquities of the backlog.

‘My husband has always been fit and he loves his dancing, but he’s been waiting for a knee operation for four years. He’s now on crutches and certainly can’t dance any more.’

Another side-effect of the pandemic is that we, the public, seem to be much more appreciative of the care we do get.

Katharine Hannon, the matron in charge of pre-operative care, has seen a marked change in attitudes.

‘We used to record a lot of DNAs — “did not attend” — but now I can’t recall the last time it happened,’ she says.

Before leaving, I am reunited with Sean Carroll in intensive care. One of the Royal Free’s longest-serving matrons, he had just taken early retirement when the pandemic kicked in, so he returned to full-time duties.

He has no regrets and says that while Covid has caused unimaginable pain, it has also brought out the very best in most people.

This hospital is immensely proud of its traditions. It was the first hospital to train women doctors and to pioneer countless life-saving medical breakthroughs. And when a bomb hit it in 1944, the Royal Free emerged from the wreckage even stronger. I sense history may be about to repeat itself.