The biological age’ of a person’s organs may vastly differ from each other, a new study finds.

A Chinese research team from the Beijing Genomics Institute (BGI) found that a person’s organs can age separately from one-another, and have drastically different ages despite being in the same body.

The concept of ‘biological age’ is one that a majority of people are familiar with – the idea that stress, fitness and other lifestyle factors can cause a person’s body to degrade at different rates.

People generally think of it as a general, overall age, though this research team instead thinks different parts of the body can all be categorized differently. 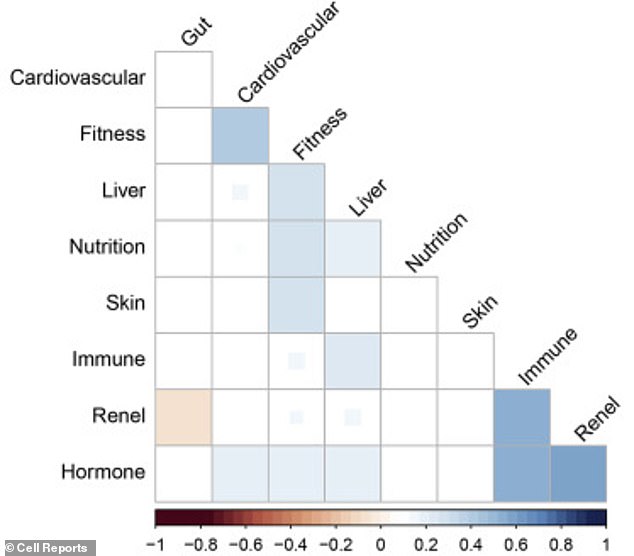 Researchers found that within a person’s body, different organs can have different ‘age’ levels and affect each other in different ways. One interesting relationship is that a healthier gut can lead to unhealthy kidneys

Researchers, who published their findings Tuesday in Cell Reports gathered data from 4,066 people aged 20 to 45 for the study.

They also gave an age to a person’s physical health, immune health and genomics depending on their findings.

‘Our study used approaches that can help improve our understanding of aging and—more importantly—could be used some day in real healthcare practice,’ said Xun Xu, a co-author from the BGI, in a statement.

‘We used biomarkers that could be identified from blood and stool samples plus some measurements from a routine body checkup.’

The ten categories were then compared to one another across the study group, to find how health in some organs may correlate to others.

Kidney health and gut health was the only negative correlation found among the participants – meaning when a person had a healthier gut they often had a less healthy kidney, and vice-versa. 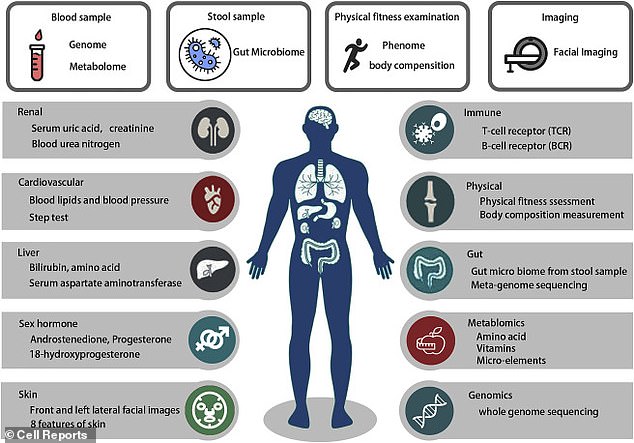 Researchers performed four types of screening to measure ten different health levels, which were then placed into nine categories for the study to evaluate a person’s overall health

Researchers explain that this may be because of the specific way gut microbiota interacts with other parts of the body.

‘The gut microbiota influences the actions of a range of harmful and potentially harmful ways and it has been reported that the accumulation of microbiota-derived metabolites was associated with chronic kidney diseases,’ they wrote in the study.

The research team plans to follow up with study participants again in the next week to see how these correlations adjust, and how much the health of individual organs can change in only a year’s time.

They are hopeful that their work will help fill a need in the medical field that will help doctors make better decisions tailored to each patient.

‘There has been a lack of practical applications in a population-based sample for precisely estimating the aging rates of live people’s organs and systems,’ said Xiuqing Zhang, co-author of the study and researcher from BGI.

‘So we decided to design one.’