England faces a breast cancer timebomb as official figures show a million fewer women were screened for the disease over the first year of the pandemic.

In total 1.19m women had the vital tests in the 12 months to April 2021, marking the lowest number since records began two decades ago and down nearly half on 2.12m the previous year.

There were also around 7,000 ‘missing’ breast cancer cases during the first year of the pandemic, with experts warning that delays in diagnoses will reduce women’s chances of survival.

Charities said today’s statistics were an ‘alarming reminder’ of the impact of the pandemic, and warned it would lead to avoidable deaths.

NHS hospitals suspended the screening program in March 2020 as the health service turned its attentions to the pandemic during the first national lockdown.

In the 12 months to April 2021, there were just 1.85m invites sent out – the fewest since 2004 and 40 per cent lower than the previous year. Checks dropped across all age groups and fell below ‘acceptable’ levels in all regions of England.

Problems with diagnoses during Covid has affected all cancers, with estimating charities there are more than 50,000 ‘missing’ total cases.

Health Secretary Sajid Javid has announced a war on cancer which involves 10m extra diagnostic tests — including for breast cancer — carried out from 2025 in diagnostic hubs to be set up in car parks, shopping centers and community centres.

NHS medical director Professor Stephen Powis said the health service was now inviting ‘more people than ever’ for screenings and investing £70million in ramping up the services. But he admitted they were ‘inevitably’ impacted when Covid first struck. 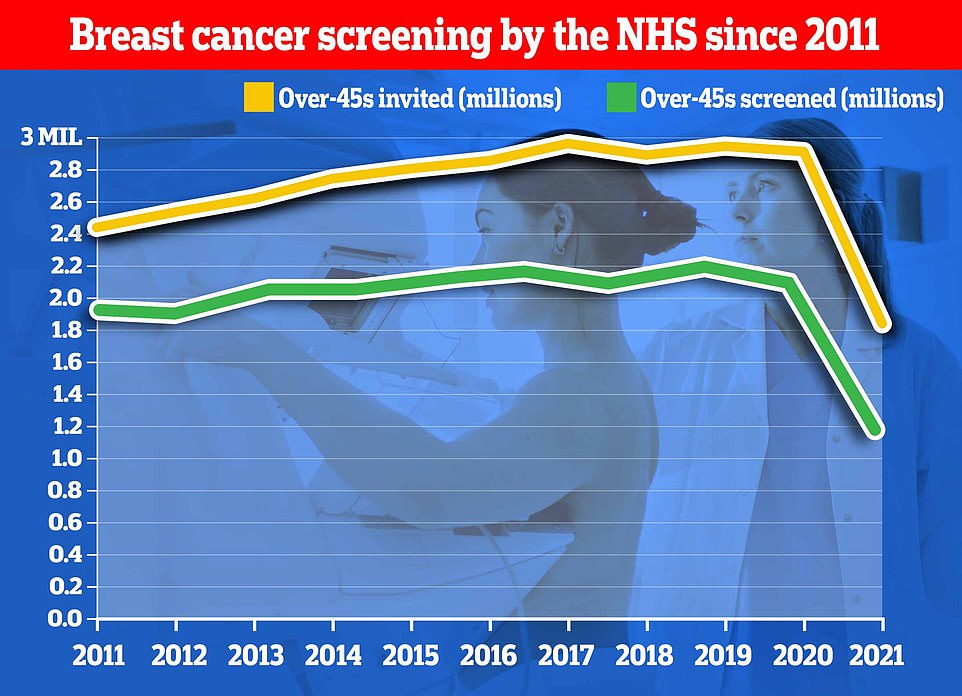 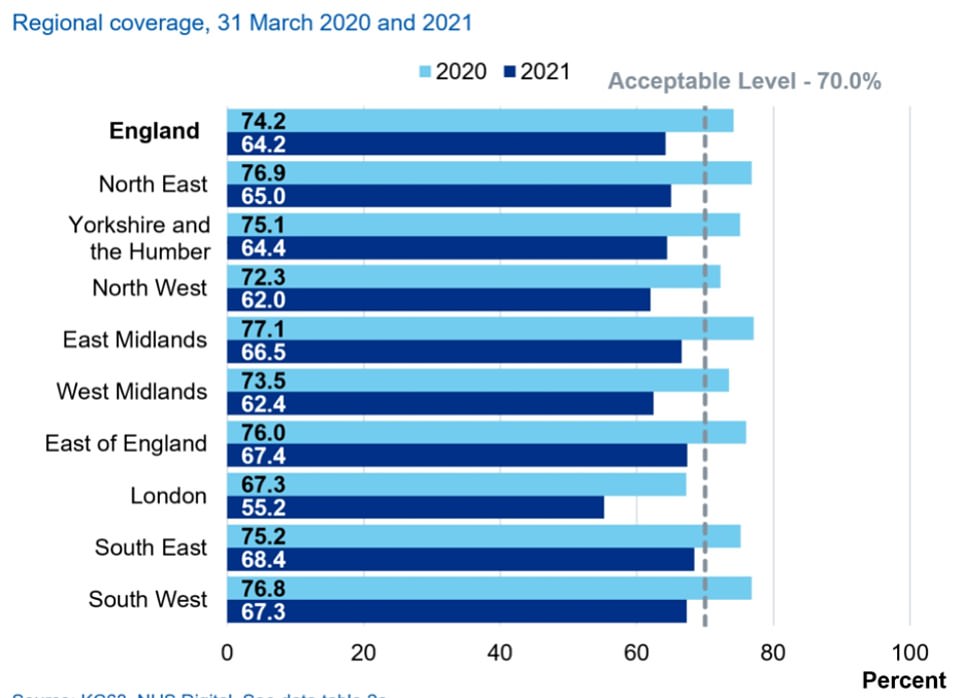 Across all regions cancer checks fell below the ‘acceptable’ level, NHS figures showed. Initially only London was below this with 67.3 per cent of women screened 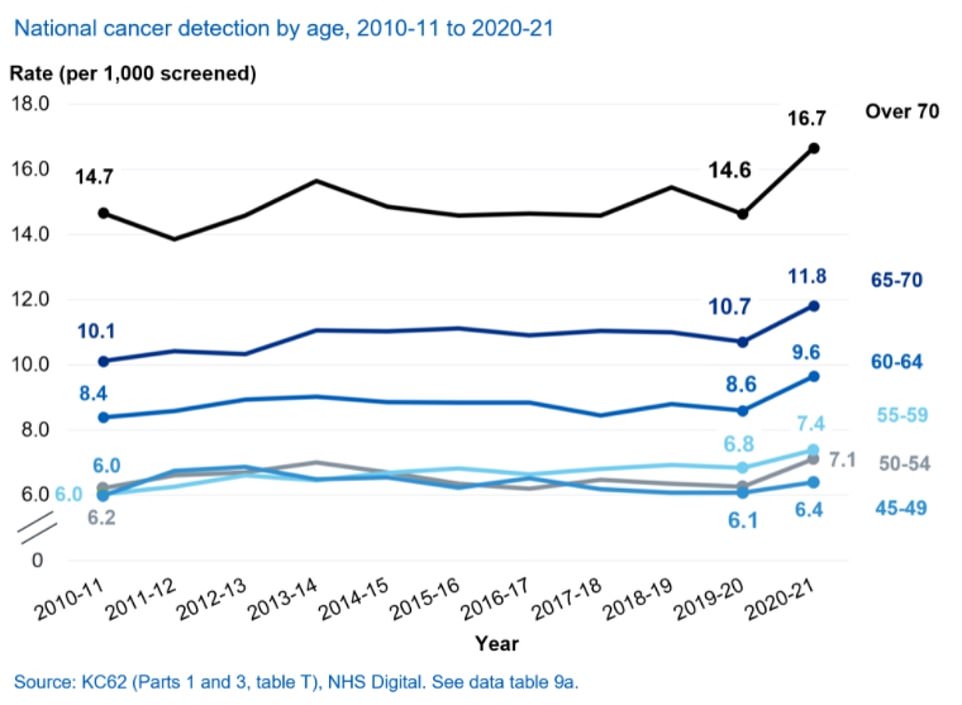 Breast cancer detection rates rose among those who were checked. But NHS figures showed a total of 7,000 fewer breast cancer cases were diagnosed last year compared to the previous 12-month period

Women are invited for their first breast cancer screen between the ages of 50 and 53, and are then asked to come for checks every three years until they are 70.

Across all age groups, national coverage for breast cancer — the proportion of women checked every three years — dropped during the first year of the pandemic.

Only a third of English adults have seen a NHS dentist in the past two years of the pandemic, shocking new data has revealed.

Official health service data shows just under 15.8million adults in England were seen by an NHS dentist in the 24 months to the end of 2021.

It marks a 6million drop-off compared to the 24 months to the end of 2019, the last period of data unimpacted by the Covid crisis.

Like many other services people struggled to access dentistry during the pandemic as many practices were forced to shut their doors during lockdown and hundreds of dentists left the profession themselves or went entirely private, exacerbating a long term trend in the workforce.

The new report prompted the British Dental Association (BDA) to warn the sector was in the ‘last chance saloon’ and urged the government to commit to rapid and sweeping reform of the industry.

They warned the nation’s oral health will begin to suffer due to widening inequality between those unable to see an NHS dentist and those who can afford to go private.

Less adults being able to see an NHS dentist will eventually come back to bite the nation, the BDA warned, as minor problems that could be fixed with simple procedures become more severe and expensive to treat. 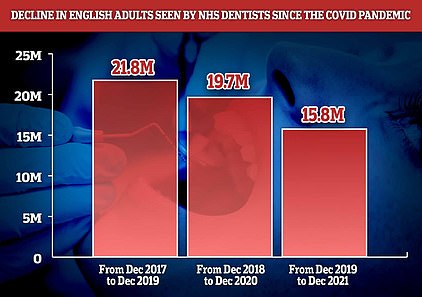 Official health service data, which records the number of adults seen by NHS dentists in 24 month periods shows the drastic decline in the number of people seeing a dentist since the pandemic. While people struggled to access NHS dentistry services before Covid due to a lack of appointments, the situation has deteriorated further with 6million fewer people seen compared to pre-pandemic levels

The BDA added that nearly 1,000 dentists have left the NHS in the last year, a trend they expected to continue.

Recent surveys conducted by the BDA indicated that 40 per cent of dentists said they were likely to change career to seek an early retirement, citing current pressures on services.

Additionally, two out of three dentists said they plan to scale back their NHS services, and a third say they plan to fully private within the next year.

The BDA says despite a recent £50m funding boost from the Government the long term funding of NHS dentistry services remains uncertain.

It argues the sector would need a £880m boost just to catch-up from where services were in 2010.

In every region coverage was also below the ‘acceptable’ level of 70 per cent, whereas before the pandemic it was only below that threshold in London.

The capital still had the lowest screening levels (55.2 per cent), followed by the North West (62 per cent) and the West Midlands (62.4 per cent).

But even in the regions with highest coverage, of the South East (68.4 per cent) and East (67.4 per cent) it was still below the recommended threshold.

This may be because lack of access to services has led to early warning signs of cancer being missed, with more patients instead going on to develop the disease.

The report’s figures only cover up to April 2021, but since then NHS figures show breast cancer waiting times have continued to drop.

NHS England figures show 62 per cent of patients referred for a consultation with breast symptoms where cancer was not initially suspected were seen within two weeks.

But by December, the latest date available, this had dropped below 50 per cent.

For all cancers, more patients are now waiting longer than two weeks for a consultation following a GP urgent referral than in April 2021.

Initially 85 per cent were seen within this time frame, but over the following eight months it has dipped to 78 per cent.

‘An estimated 8,870 women in the UK are living with undetected breast cancer as a result of the pandemic — a significant number of which would have been detected at routine screening.

‘Tragically, research suggests that up to an additional 680 women could die from breast cancer in the next decade due to impacts of the pandemic on screening.’

She said: ‘Next year’s screening figures will be the true indicator of how successfully the program has restarted, recovered and delivered on these actions.’

The head of early diagnosis at Cancer Research UK, Jodie Moffat, warned NHS staff were struggling to get through the backlog because of a lack of capacity.

She said: ‘Clarity is needed on how the extra money promised to the NHS is going to be used to tackle the chronic workforce shortages, which are holding back the recovery of cancer services and are preventing the NHS from being a world class cancer service. ‘

Mr Javid has unveiled a £12billion-a-year blueprint to bring the NHS out of the pandemic, in which he promised to ‘go to war on cancer’ and tackle spiraling waiting times.

The Health Secretary set an aim for 75 per cent of urgent cancer referrals to see it either diagnosed or ruled out within 28 days, and for the number of people waiting more than 62 days for an urgent referral to be scaled back to pre-pandemic levels by March 2023.

Diagnostic hubs will also be set up across the country to help the NHS work through the spiraling backlog of women yet to be offered their three yearly screening appointment.

But the plans have been blasted as a ‘pathetic rehashing of old pledges’ by Labor, who say the Government should aim to go further.

Hospitals are already facing severe pressure with the waiting lists for routine surgeries now at an all-time high of 6.1m and predicted to double over the next two years due to pandemic delays.

Leaked projections suggest it could at least double by 2025 as 10m ‘missing’ patients come to the health service.

Professor Powis said: ‘The pandemic inevitably had an impact on some routine services and we know that fewer people came forward for cancer checks.

‘The NHS is now inviting more people than ever to be screened, while investing a further £70 million to support screening services, which we know saves thousands of lives, so it remains vital that women come forward when they receive their invitation to do so .’ 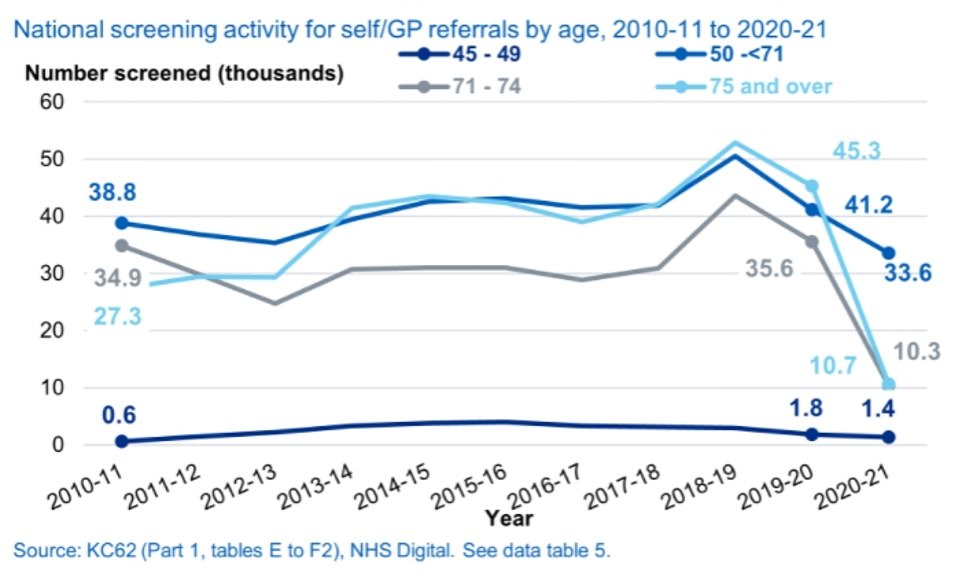 Self-referrals also dropped in all age groups. There have been fears that this was because people were steering clear of the NHS during the pandemic for fear of being a burden or catching the virus