Man, 63, who had to crawl around his home reveals life-long illness made him contemplate suicide - freetxp Skip to content

A 63-year-old man, who was forced to crawl around his home due to a life-long skin condition, said he considered suicide due to the one-in-a-million disease.

Alan Bentley, from Leek in Staffordshire, said he suffered a ‘really miserable existence’ due to Olmsted syndrome — a condition that caused thick yellow calluses to form on the soles of his feet.

The illness, which triggered intense pain whenever he walked, forced him to crawl on all fours around his home.

Mr Bentley, a former yard manager at a fencing company, had to take an office-based job, so he could spend most of his day sitting down. And he vowed to never have children in case he passed on the condition.

His daily struggle meant he considered taking his own life in his twenties.

But after finally being diagnosed nearly a decade ago, the stepfather-of-two started taking lung cancer drug Erlotinib last year, which let him walk without major pain for the first time since childhood.

Olmsted syndrome, also known as mutilating palmoplantar keratoderma (PPK), is a condition present from birth that triggers abnormal growth and thickening of the skin on the soles of the feet, palms of the hand or mouth.

There is no cure for the condition, which is thought to affect less than one in a million people and usually gets worse over time.

Mr Bentley said: ‘There’s the ache, it throbs, then there’s the burning derivative – it feels like fire.

‘The pain is constant, the soreness when you put your feet down is unbelievable, from the moment you get out of bed.

‘I’d go down the stairs backwards on my knees.’ 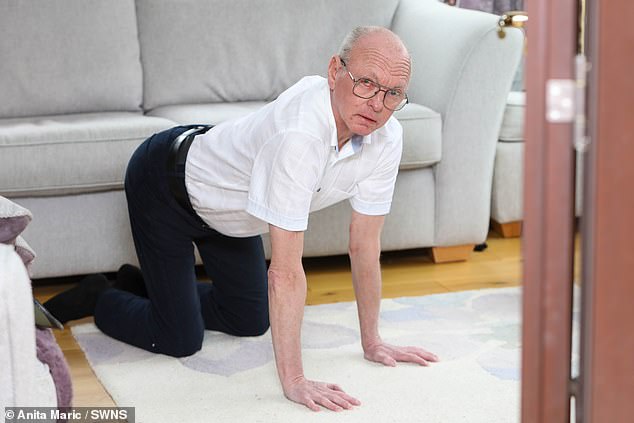 Alan Bentley (pictured), 63, from Leek in Staffordshire, was forced to crawl around his home for the majority of his life due to hard calluses that covered his feet, caused by Olmsted syndrome 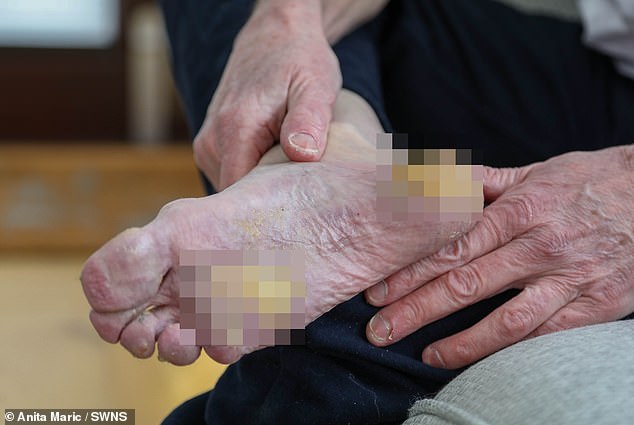 Mr Bentley said the condition meant there was ‘very little flesh’ on his heels and the balls of his feet, which were instead covered with ‘massive calluses’ that could ‘grow up to virtually an inch thick’. He said: ‘They were just lumps of hardened skin and a horrible yellowy colour, while my feet were red with inflammation’

The condition, which is caused by gene mutations, often occurs sporadically in people who have no family history of the disease, but can also run in families.

Mr Bentley’s father, Tom, who was a father-of-three, also suffered from Olmsted syndrome.

None of his children were born with symptoms of the condition. But hard skin started to develop on Mr Bentley’s skin when he was a baby.

By the age of 10, his feet were covered in calluses, stopping him from having a normal childhood.

WHAT IS OLMSTED SYNDROME?

Olmsted syndrome is a condition present from birth that triggers abnormal growth and thickening of the skin on the soles of the feet, palms of the hand or mouth.

The condition, also known as mutilating palmoplantar keratoderma (PPK), is thought to affect less than one in a million people and usually gets worse over time.

It can also cause the skin to split and bleed, pain and itching, abnormal hair growth, as well as nail and sweating abnormalities.

The symptoms can lead to difficulty walking, joint problems and an increased risk of infection.

It is often genetically diagnosed through the symptoms it causes, but testing may be needed to confirm the diagnosis.

There is no cure for Olmsted syndrome. Instead, treatments such as steroids and retinoids are usually prescribed to manage symptoms.

He said: ‘I couldn’t play football and I loved football, I couldn’t do anything like that. It made me depressed and gave me a great feeling of isolation.’

Mr Bentley never let his classmates see his feet, but went through years of name calling due to his other symptoms, which included thin hair and bald patches.

His symptoms worsened in summer, when he was forced to crawl around his house to take the pressure off his feet.

He said: ‘There was very little flesh on the heels and on the ball I had these massive callouses, they could grow up to virtually an inch thick.

‘They were just lumps of hardened skin and a horrible yellowy colour, while my feet were red with inflammation.’

Mr Bentley attended chiropody appointments every six weeks up until the age of 11 to have his hard calluses removed using a scalpel or razor without any anaesthetic.

He said: ‘By the time I got to age 11 I couldn’t bear my feet being touched because they were so sensitive, and the chiropodists were cutting into my skin.

‘In the first 24 hours you’d get some relief but after that they’d start to grow back again.

‘My dad used to trim his own because he would not let anybody near his feet.’

After leaving school he chose an office job so he could spend the majority of the day sitting down. And he decided to never have children to avoid passing Olmsted syndrome on.

He said: ‘It was awful there was no social life whatsoever. I wasn’t jiving away to Slade like the rest of my colleagues back in 1970s!

‘It was a really miserable existence in many ways, but I just had to get through it.’

At just the age of 25, the yard manager at a fencing company was drinking heavily and even contemplated suicide.

‘I’d neck some barley wines and I’d be asleep for three to four hours before I would wake up with my feet throbbing,’ the grandfather-of-four said.

‘I got depressed from time to time, mainly because there did not seem to be any way out of this problem.’ 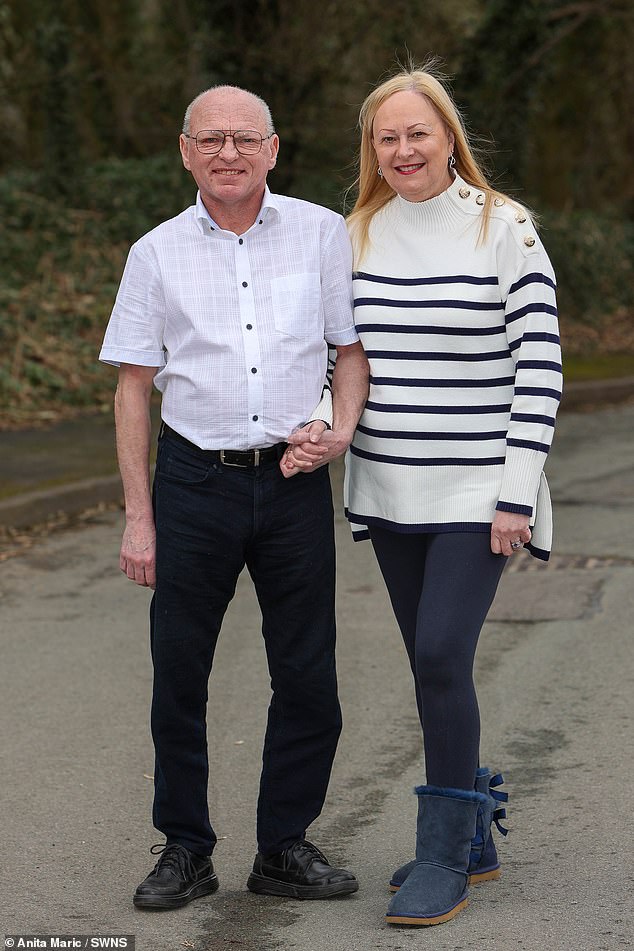 After a lifetime of suffering, Mr Bentley was diagnosed in 2013. His now-wife Susan (right), 65, showed him a YouTube video about a different but similar genetic condition, which prompted Mr Bentley to get a genetic test. After sending off a saliva sample, he received his diagnosis of Olmsted syndrome

Over the years he was treated by dermatologists with different medications that at best provided temporary relief, so he learned to trim his calluses himself using Cod Liver Oil to manage the inflammation and pain.

After a lifetime of suffering, Mr Bentley was diagnosed in 2013.

His now-wife Susan, 65, showed him a YouTube video about a different but similar genetic condition, which prompted Mr Bentley to get a genetic test.

After sending off a saliva sample, he received his diagnosis of Olmsted syndrome.

Last year, his doctor recommended that he should start taking Erlotinib, a drug previously used for pancreatic and lung cancer.

Within 24 hours of taking it, he had progressed from being forced to crawl through his house to being able to stand and walk.

He said: ‘That wasn’t just a breakthrough, that was a nuclear bomb going off.

‘It was absolutely wonderful, my hopes had been dashed time and time again but it was like, “wow, we’re getting close here”.

‘The morning after taking the pill for the first time I walked half a mile to our house, which I wouldn’t have done otherwise except after extreme duress.

‘The following morning when you’d expect there would be some kind of retribution after putting myself through that, my feet did not hurt

‘For the first time since the age of eight or nine I could walk without major discomfort.’

Despite there being no cure for his condition, Mr Bentley said the diagnosis has changed his life.

He said: ‘It has absolutely dominated my life, spoiled my life, limited my life, but in some ways it has also made my life.

‘Faced with such a situation either makes or breaks people. I have come through it and have kept fighting – and it is now my crusade to stop others from suffering.

‘It’s so important that medical professionals and people suffering from conditions like Olmsted syndrome know that getting your genome sequenced is essential – identifying the appropriate genes can be the pathway to a diagnosis, receiving the right treatment and improving people’s lives.’

Professor Edel O’Toole, a molecular dermatologist at the Queen Mary University of London, said: ‘For anyone with a rare genetic skin disorder getting a genetic diagnosis is important.

‘Although having a genetic diagnosis may not produce the opportunity for an instant cure for the individual, there are a lot of researchers working on rare skin disorders and new treatments will become available.

‘It is likely that many of these treatments will require a precise, genetic diagnosis.

‘Although the disorder that Mr Bentley has is rare, knowing his genetic diagnosis allowed prescription of a drug which was truly transformative for the pain in his feet and some other symptoms.

‘The new NHS Genomic Medicine Service and the mainstreaming of genetic testing to specialists that see the patients, in my case dermatologists, will allow more rare skin disorder patients to get a genetic diagnosis.’

Through the programme, the health service plans to sequence 500,000 genomes by 2024 to enable faster diagnosis for patients with rare diseases, match people to the best treatments and increase cancer survival due to faster diagnosis.