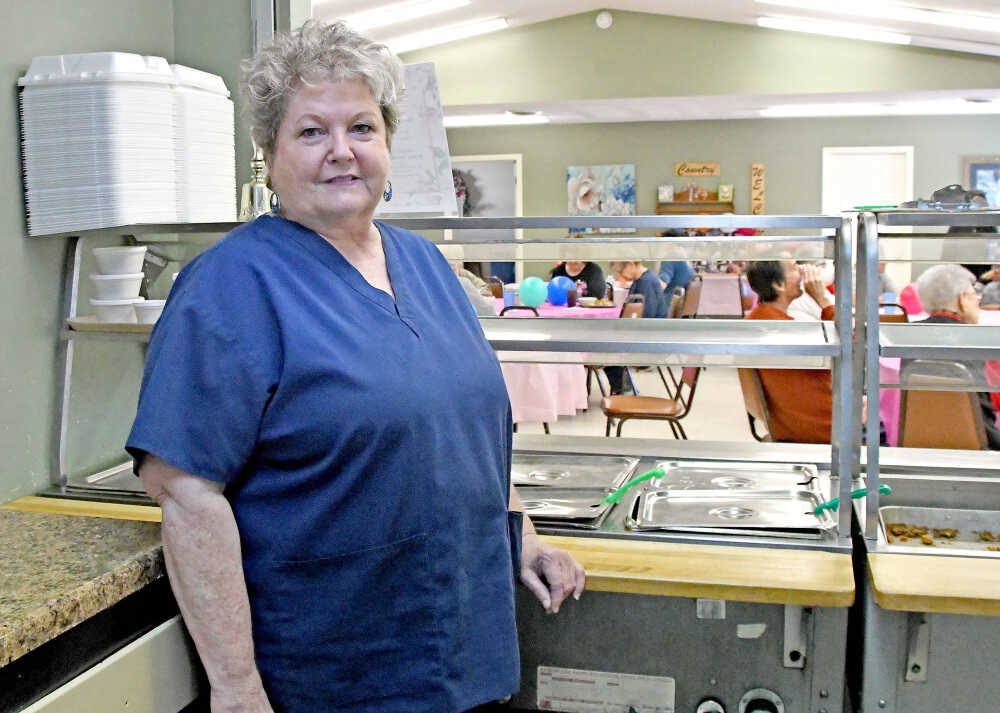 Carolyn Farrenburg officially stepped away from the kitchen at the Oaks Nutrition Center on Feb. 28 after 25 years. In her retirement, Farrenburg said she plans to travel, enjoy her grandchildren and occassionally fill in when needed at the Center. She will be replaced by Tawisha Mansfield.

NEW MADRID, Mo. – Carolyn Farrenburg thumbed through a stack of photos from events over the years at the Oaks Nutrition Center in New Madrid.

She traced her finger around the faces she saw.

Some, she pointed out with a sigh, have died. Other photos brought a laugh and a favorite memory of times spent together.

After 25 years at the Center, there are many memories for Farrenburg.

On Feb. 28, Farrenburg officially took off her apron and ended her duties as head cook. But before she walked out the door, she created more memories with those whom she described as family.

“This is my second home,” said Farrenburg. “I went through some hard times and they were all here for me. It is just like one big family here. They are my people.” 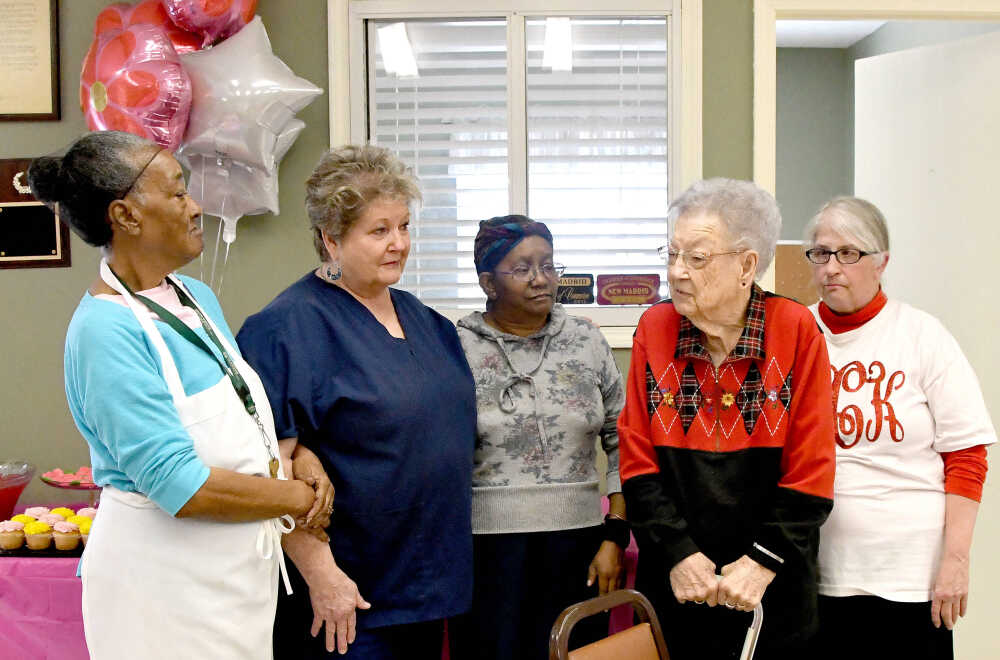 Carolyn Farrenburg, second from the left, gets a little teary eyed as Dorothy Fowler talks about their time working together. Pictured from left are Paulette Bledsoe, Farrenburg, Brenda Mason, Fowler and Madeleine Cowan.

When she was hired as a cook, Farrenburg admitted she knew nothing about the job. But, like a family would, those around her helped her learn.

“I just fell in love with everybody,” she added with a smile.

At that time in addition to providing hot meals at the Center, meals were packed and delivered to the homebound in New Madrid, Howardville, Lilbourn, North Lilbourn and homes in between. Farrenburg said as soon as one route was delivered, another route was packed and deliveries resumed.

She estimated for some 10 years, she helped cook and delivery approximately 160 meals a day five days a week to those in need.

But it was so much more.

“We saw a lot of people and a lot of times we were the only people they saw. We would take (the meals) into them and they would want you to talk to them and of course, you would. That is what this program is about,” she explained.

With rising gas prices and improving technology, the Center now provides frozen meals to the homebound. Farrenburg explained these are delivered once every two weeks.

While many of those meals are purchased, she said they also provide some meals made at the Center for those who want to change things up a bit. According to Farrenburg, certain meals are a crowd-pleasing favorite.

“They say they love my meatloaf and my chicken and dressing,” she said with a laugh.

While it is a good place to come for a nice meal, Farrenburg said the Center also is a place to socialize. There are bingo games once a week and an opportunity to test their skills at a “Jeopardy” quiz.

Each Christmas, the Center hosts a holiday party with participants adding their favorite dishes to those brought from the kitchen. Farrenburg said everyone dresses up for the occasion, where they will eat, play games, sing songs and exchange gifts.

As part of the Aging Matters Program, Farrenburg pointed out the Center offers even more benefits.

“They may need to talk to other people about their Medicare, their Medicaid. Anything that has to do with aging – maybe being able to talk to someone if you have a problem with hospice or they need a wheelchair or help with their taxes. Aging Matters is about helping people,” she said.

She knows the Center has made a difference not just in her life but in the lives of those it serves. Farrenburg recalled when a woman who came in and explained she didn’t have any money to pay for a meal.

“I told her we don’t ask for anything just whatever you want to donate. She talked with me for a good while and told me about the problems she was having and she ate her dinner,” Farrenburg said. “I think she felt a little better and she started to come back. I think it made a difference because she felt like she could come in and she wasn’t looked down on. This is a place for people.”

Already Farrenburg has a long list of things to do in retirement. 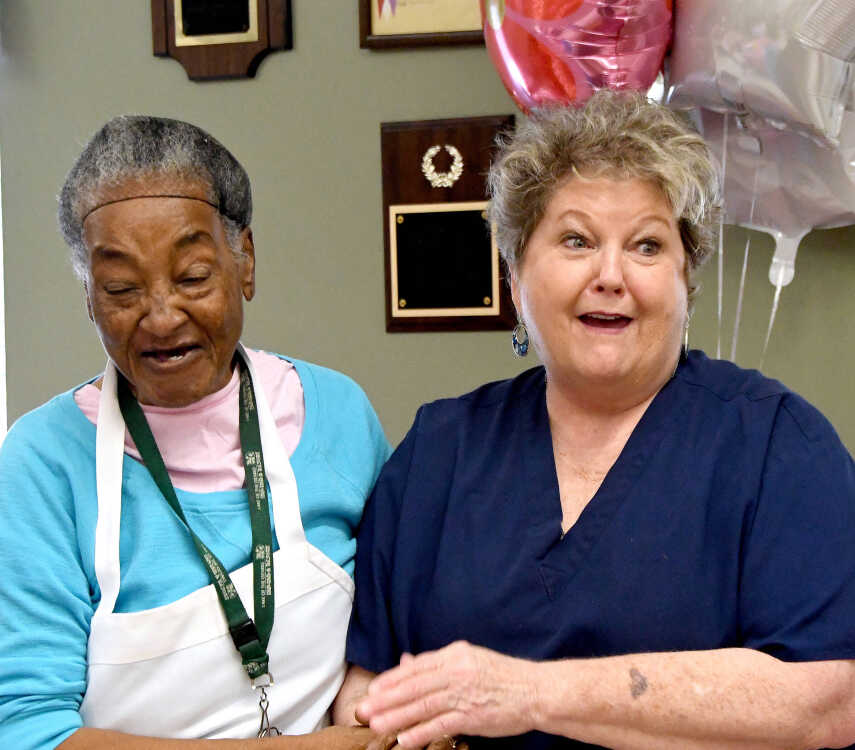 Carolyn Farrenburg, right, reacts as Paulette Bledsoe recalls their work together at the Oaks Nutrition Center in New Madrid Farrenburg retired Feb. 28 after 25 years at the Center.

She wants to travel, spend more time with her grandchildren and tend to her garden and her flowers. Although returning, she has also agreed to fill in as a cook at the Center.

But before she could start on those retirement plans, her co-workers and those she had served over the years wanted to celebrate one final time. There was cake and punch to mark her final day along with gifts and cards.

There were plenty of hugs as well.

Sari Kersey, who serves as the area supervisor for three Oaks Center including the one at New Madrid, said Farrenburg is wonderful to work with.

“She is fun to be around and she cares deeply about the seniors here. This is her second home and she has made it a home for them,” Kersey said. 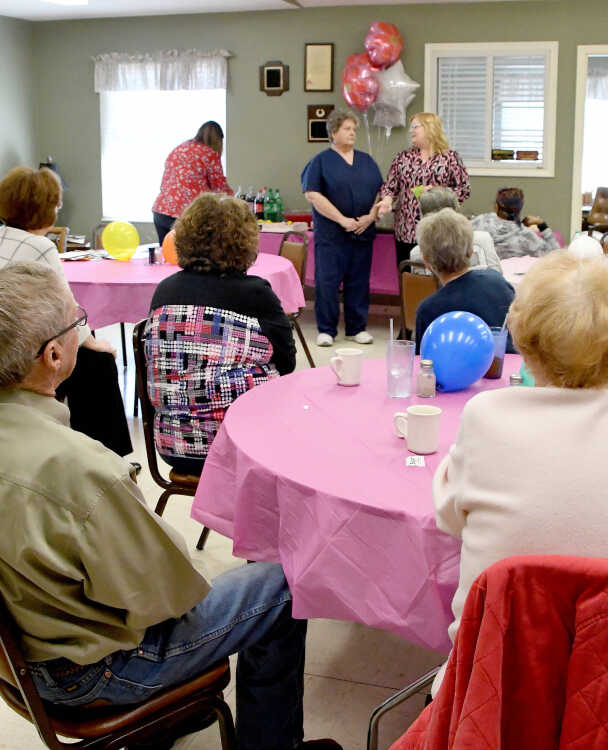 Rhonda Bramlett, director of Aging Matters, speaks about Carolyn Farrenburg on her retirement after 25 years as head cook at the Oaks Nutrition Center in New Madrid. Those she has cooked for and those who Farrenburg worked with through the years gathered on Feb. 28 to celebrate and reminisce.

As a parting gift, Kersey presented Farrenburg with a gift certificate to purchase a new rose for her garden.

Others offered farewell memories of times spent together, bringing laughs from the audience. A few brought tears to Farrenburg’s eyes.

Admitting she would miss all of them, Farrenburg laughed and made one final promise: “I’m going to come back here and sit down and say, I would like to have my plate, please.”