Is There Any Nutrition Whatsoever in Sausage Egg McMuffins? - freetxp Skip to content

The Sausage Egg McMuffin, aka the Sausage McMuffin with Egg, truly is the epitome of the poor man’s eggs Benedict. To wit: If you take the eggs Benedict and eliminate all of the pomposity of the Canadian bacon, the poached egg and the hollandaise sauce, what would you be left with? A plain pork sausage, an egg that’s been fully cooked through and a slice of American cheese — or, you know, a Sausage Egg McMuffin.

You’d think then that the ingredients of the Sausage Egg McMuffin would be pretty simple — some combination of pork, eggs and standard bread and cheese staples. Oh, think again.

Yeast: The fungus that makes dough rise and get larger, just like a Super Mario mushroom.

Yellow Corn Meal (Degermed Yellow Corn Meal and Corn Flour): Steel-ground yellow cornmeal, which is common mostly in the US, has the husk and germ of the maize kernel almost completely removed. This is usually the main ingredient in cornbread, and it can be used to give baked goods a hint of coarseness.

Sugar: In addition to adding sweetness (obviously), sugar reduces the time it takes for dough to rise, which is important when you’re a restaurant chain that now serves breakfast all day long, as well as more breakfasts than any other restaurant chain.

Soybean Oil: In the US, soybean oil is commonly referred to simply as vegetable oil, which is a misnomer considering an actual soybean is technically a fruit. Naming inconsistencies aside, soybean oil is amongst the safest oils to cook with, given its relatively high smoke point, limiting the likelihood that it will result in the production of free radicals.

Salt: A single Sausage Egg McMuffin contains 830 milligrams of sodium and 36 percent of your advised daily sodium intake, which isn’t the worst thing in the world if you’re only ordering one for breakfast each morning. If you get them in pairs, now you’ve got to pay diligent attention to the quantity of salt that works its way into the remainder of your daily snacks and meals.

Dough Conditioners (Mono-, Di- and Tricalcium Phosphate, DATEM, Ascorbic Acid, Enzymes, Ethylated Mono and Digylcerides): Any ingredient or chemical added to improve the texture or quality of dough is classified as a dough conditioner. While some aren’t as sketchy as they sound — ascorbic acid is just another form of vitamin C — some are downright devious. Mono and diglycerides, for example, may be packed with trans fats that aren’t listed on the label. Because trans fats are associated with an increased risk of heart disease, stroke and diabetes, your intake of them is far worth getting under wraps.

In particular, DATEM is an acronym that stands for “diacetyl tartaric acid esters of monoglycerides.” This is a dough conditioner —specifically a strengthener — and has been found to cause heart problems in lab rats, but only when they were fed the human equivalent of 350,000 milligrams of DATEM per day for several weeks.

Wheat Gluten: Wheat flour that’s been hydrated to activate the gluten, then processed to remove everything except the gluten. It’s added to infuse the doubt with a chewy quality.

Cultured Wheat Flour: Cultured wheat is a natural, clean label mold inhibitor and antimicrobial agent. It can be used in yeasted and chemically-leavened products such as breads, buns and cakes.

Baking Soda: As a common leavening agent, baking soda causes dough to rise and become porous by increasing the surface area. It’s also taken as a supplement to cause your pH level to quickly become alkaline. If you have a set of functioning kidneys, this probably isn’t something you need to devote much of your attention to.

Fumaric Acid: A preservative and mold inhibitor. The FDA considers it to be safe when added in small amounts.

Egg: The cooked, unfertilized embryo of a chicken. It tastes a lot better than its printed description would lead you to believe.

Pork: The meat from pigs.

Water: Also known as “dihydrogen monoxide” to the folks who want to trick gullible people into signing petitions.

Spices: The FDA doesn’t require food labelers to list each spice by their specific name (as a means of protecting their recipes) as long as it follows their definition of the word “spice”: “The term spice means any aromatic vegetable substance in the whole, broken or ground form, except for those substances which have been traditionally regarded as foods, such as onions, garlic and celery; whose significant function in food is seasoning rather than nutritional; that is true to name; and from which no portion of any volatile oil or other flavoring principle has been removed.”

I could take a wild stab and say one of the spices is at least black pepper, but I don’t like being proven wrong.

Dextrose: Dextrose is a sugar derived from starches, like corn, and is chemically identical to glucose, or blood sugar. Because of this, dextrose is also used medically to treat low blood sugar and dehydration, and is theorized to help offset sugar imbalances in the intestines.

Rosemary Extract: Rosemary extract is a natural preservative, often used as an alternative to synthetic ones, like BHA and BHT, and it works well. It does cost more for the producer, being natural and all, but at the end, the consumer benefits.

Milk: That stuff that comes from all female mammals, although in this case, we pray that McDonald’s is using the milk of cows.

Cream: The fat-filled layer skimmed from the top of milk before homogenization.

Sodium Citrate: Similar to calcium disodium EDTA, sodium citrate binds to metals and acts as a preservative. It also can be used to provide a sour taste.

Enzymes: While discussing the ingredients in nacho-cheese Doritos, Shanahan explained to us that enzymes are just used to accelerate the coagulation process: “Pretty much all cheese is made using some kind of enzyme to speed up the fermentation process.”

Soy Lecithin: Soy lecithin is added as an emulsifier to give the cheese its texture.

Color Added: Certain artificial colors are known to be carcinogenic, but the FDA strictly regulates the types of color additives that can be used in food. It’s not like they allow you to simply drop orange and yellow crayons into the cheese blend.

Pasteurized Cream (Butterfat): Butterfat or milkfat is the fatty portion of milk.

You should tread carefully whenever you order a Sausage Egg McMuffin, especially within the context of a meal. A single Sausage Egg McMuffin is sufficient to administer 93 percent of your recommended daily cholesterol, and adding just one hash brown into the mix also pushes your sodium level to half of its recommended dosage. Basically, a Sausage Egg McMuffin is best thought of as a last-resort breakfast replacement, and not as a go-to source of sustenance each morning. Eating a couple of these every day would almost certainly be enough to ensure you a high cholesterol level, and all of the deadly maladies that accompany such a condition.

Ian Douglass is a volunteer firefighter, lackadaisical Concept2 rower and SkiErger and is the worst masters swimming All-American in recorded history. He also helps professional wrestlers publish their autobiographies, assists businesspeople with the writing of coherent thoughts and has overhyped degrees from Michigan and Northwestern. 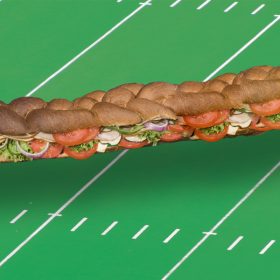