New Delhi: “Nutrition is important for children and mothers. We know this from what we see in our homes and villages. This is needed today and right now”, said Vandana Devi, President Jagriti Mahila Prerna Laghu Udyog. A small government community center in the middle of the rural landscape in India’s most populous state Uttar Pradesh, where forty percent of India’s malnourished children live, has lately been charged with high energy and optimism, because of the women’s self-help groups in the nearby villages. 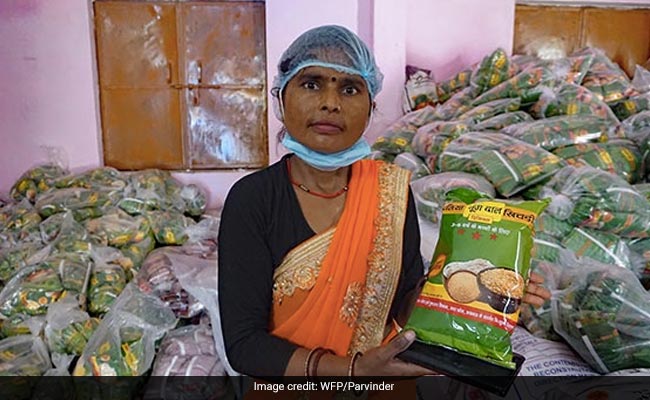 Vandana Devi displaying one of the products created with additional nutrients for pregnant and lactating women, and children under six years

Wearing blue dungarees or dresses with traditional sarees, the women from the micro-enterprise show a clear sense of purpose and intent as they go about their work at the unit that makes nutritious age-appropriate products for young children, pregnant and lactating women, and adolescent girls.

The unit is run by women from the nearby villages and the products are supplied. Since we relate to each other, the quality and value of what we make are appreciated by everyone, she added while adding the use of filtered water and other measures that are taken for keeping the hygiene standards.

For the women here the unit and coming together has brought changes in the families and personal lives. We are earning members, doing business and the community is more aware now of the importance of nutrition.

Ms Devi is the president of the micro-enterprise that runs the production unit at the Gauspur village in Fatehpur district some 84 miles from the state capital Lucknow.

Also Read: International Women’s Day 2022: From Suing Indian Government To Knocking Doors Of The UN, This Teenage Climate Warrior Is Calling To Save The Earth

The first 1,000 days of life – roughly the time between conception and a child’s second birthday – is a special period of opportunity when the foundations of optimum health, growth, and neurodevelopment are established. In India, this period is effectively catered to by the Integrated Child Development Services (ICDS) scheme through the take-home rations.

The women working in this unit correctly recognise that if the take-home ration produced by them is nutritious, it can play an important role in preventing malnutrition among children. Therefore, the product made by them consists of good quality protein in the form of skimmed milk powder, fat through the addition of oils and vitamins and minerals, says Dr Shariqua Yunus, who leads the nutrition portfolio of World Food Program (WFP) in India and has been driving this.

India has made great progress over the years on food production by achieving self-sufficiency, initiating promising models for resilient and sustainable livelihoods, and inclusion through the food safety net. However, the prevalence of malnutrition at a country level continues to remain high. 35.5 per cent of children under 5 years of age are stunted low-height-for-age); 19.3 per cent are wasted (low-weight-for-height), and 32.1 per cent are underweight including a high prevalence of anaemia and micronutrient deficiency disorders. While the indicators of undernutrition have shown a reduction between the two rounds of the National Family Health Survey 4 (2015-16) and NFHS-5 (2019-21), the prevalence of anemia and obesity or overweight has increased across all age groups.

Madhu Devi, the newest member to join the unit at the time, said, 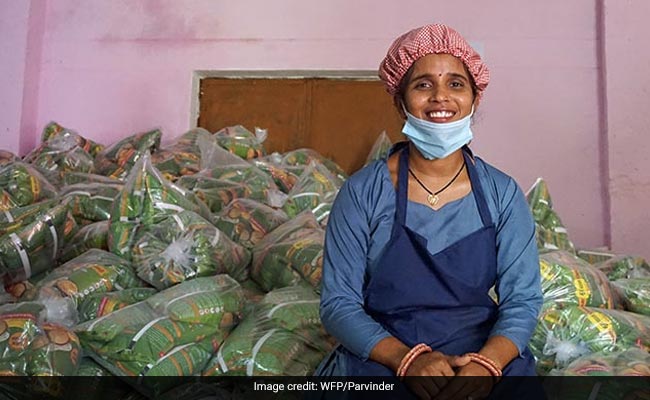 Working at the unit has changed how my family looks at me. They see me as a working woman now. What makes me happy is that my work will help children and mothers.

She carried a smile that rarely left her face even as she pushes carts filled with grains to the processing unit.

Engaging community women to run the take-home ration production units is a unique gender-transformative initiative, which not only provides livelihood opportunities to the local women but also empowers them economically. It is heartening to see the benefits of the initiative visible on the women even within a few months of its inception. 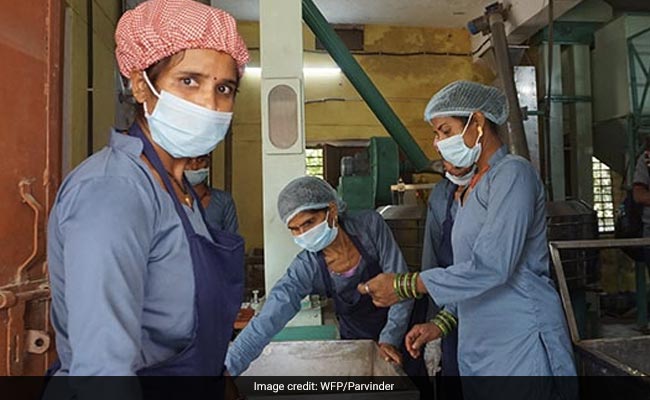 Madhu Devi, who recently joined the take-home ration production unit feels this will help her contribute to strengthening the nutrition of children and mothers in her community

Aradhana Srivastav, WFP’s gender lead in India who has been closely working on the potential component of the nutrition-focused initiative, said,

Women consider their job and incomes as major achievements. The exposure that they’ve got dealing with people and matters outside the confines of their home, independently, without the interference of their family, has enhanced their self-confidence and given them a sense of power. The money that they bring has improved their status within the family and the community too, which has increased their participation in decision-making at both levels. All this is new, and empowering, and the women are already reveling in it.

An Idea Whose Time Has Come

In July last year, Vandana Devi was one of the women who interacted with Chief Minister Yogi Adityanath through video conferencing as he provided state investment to the production unit as a sign of the state’s commitment towards the project.

I was nervous, the night before, as I was representing all the women who work at the nutrition production unit. But it was ready and happy that we got money from the government. Everyone now takes it seriously, added Vandana Devi.

The production unit is part of a partnership between the United Nations World Food Program (WFP) and the Government of Uttar Pradesh. The production units’ pilot has become a harbinger of a large policy change as these are being scaled from two districts to the entire state with over 200 units being announced by the Prime Minister of India recently.

(Parvinder Singh is the Head of Communications at the United Nations World Food Program in India. Parvinder has a research degree in Indian economic history from JNU, with Doctoral Fellowship from ICSSR, and qualifications in public policy.)

Disclaimer: These are the personal opinions of the author.

NDTV – Dettol have been working towards a clean and healthy India since 2014 via Banega Swachh India initiative, which is helmed by Campaign Ambassador Amitabh Bachchan. The campaign aims to highlight the inter-dependency of humans and the environment, and of humans on one another with the focus on One Health, One Planet, One Future – Leaving No One Behind. It stresses on the need to take care of, and consider, everyone’s health in India – especially vulnerable communities – the LGBTQ population, indigenous people, India’s different tribes, ethnic and linguistic minorities, people with disabilities, migrants, geographically remote populations, gender and sexual minorities. In wake of the current COVID-19 pandemicthe need for WASH (Water, Sanitation and Hygiene) is reaffirmed as handwashing is one of the ways to prevent Coronavirus infection and other diseases. The campaign will continue to raise awareness on the same along with focusing on the importance of nutrition and healthcare for women and children, fight malnutritionmental wellbeing, self care, science and health, adolescent health & gender awareness. Along with the health of people, the campaign has realised the need to also take care of the health of the eco-system. Our environment is fragile due to human activity, that is not only over-exploiting available resources, but also generating massive pollution as a result of using and extracting those resources. The imbalance has also led to massive biodiversity loss that has caused one of the biggest threats to human survival – climate change. It has now been described as a “code red for humanity.” The campaign will continue to cover issues like air pollution, waste management, plastic ban, manual scavenging and sanitation workers menstrual hygiene. Banega Swasth India will also be taking forward the dream of Swasth Bharat, the campaign that feels only a Swachh or clean India where toilets are used and open defense free (ODF) status achieved as part of the Swachh Bharat Abhiyan launched by Prime Minister Narendra Modi in 2014, can eradicate diseases like diahorrea and the country can become a Swasth or healthy India.