The first time a mother usually gets to see her baby’s face is after she gives birth.

But this child in Turkey couldn’t wait to show himself to the world, with fascinating footage showing his head moving around inside an amniotic sac.

The video, taken by gynecologist Dr Eray Balcan in Istanbul, shows the baby making facial expressions in the sac during a C-section.

Births where a baby is born in the amniotic sac are known as ‘en caul’, deliver once in every 80,000.

They are believed to be less common during caesareans because the scalpel typically punctures the sac.

Babies are protected from bumps inside the sac by amniotic fluid during pregnancy, which also helps to transfer nutrients and water to the child. 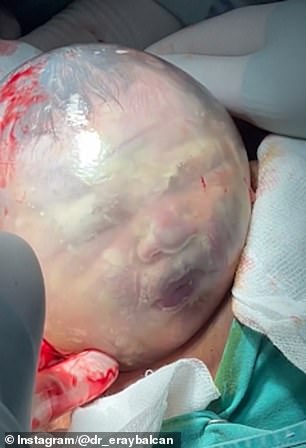 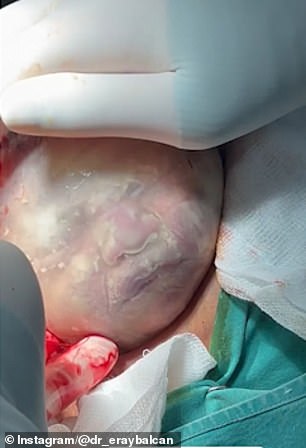 This child in Turkey couldn’t wait to show himself to the world, with fascinating footage showing his head moving around inside an amniotic sac. The video, taken by Dr Eray Balcan in Istanbul, shows the baby making facial expressions in the sac during a C-section 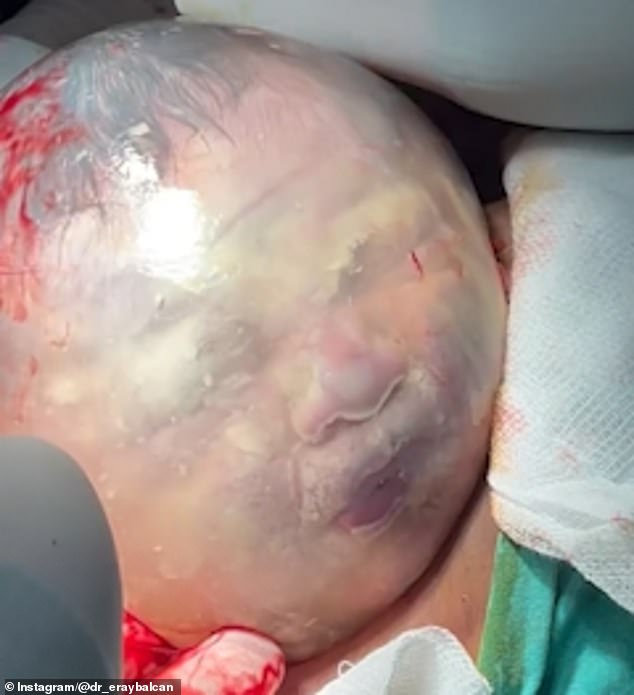 The baby — whose name is not known — moves his head around, opening and closing his mouth as Dr Balcan strokes his head

WHAT IS BEING BORN ‘EN CAUL’?

Being born ‘en caul’ means a portion of the amniotic sac or membrane remains intact during birth.

A caul is a thin, filmy membrane that may be attached to the head, face and ears or could drape over the head and cover part of the torso.

The caul is harmless and can be removed by experts.

Often, incisions are made at the nostrils to allow the baby to breathe.

The loops can then be carefully removed.

In it, the baby — whose name is not known — moves his head around, opening and closing his mouth as Dr Balcan strokes his head.

Social media users gushed over the video, describing the baby as a ‘beauty’.

‘Thanks to you, we witness such a beauty, thank you sir.’

‘May God give you a beautiful life.’

And another said: ‘Lord, how beautiful you are.

‘May they grow up with health, their eyes are bright.

‘I hope this beautiful feeling for other beautiful mothers.’

Foetuses receive oxygen in the womb from their mothers via the umbelical cord.

They do not begin breathing on their own until after they are born, with contractions during the birth helping to squeeze amniotic fluid out of their lungs.

Caesarean rates have almost doubled since the year 2000, with experts estimating that some 6.2million non-medically indicated C-sections are performed each year around the world.

Usually, C-sections are performed electively if there were problems in a previous birth or unplanned if there are complications during the birth itself.

Doctors can choose to perform a caesarean if the baby is not in the right position to be born or if the mother has medical conditions such as heart problems.

WHAT ARE THE MEDICAL REASONS FOR A C-SECTION?

There are various reasons why a doctor may recommend that you have a caesarean section instead of giving birth vaginally.

If you had complications in a previous pregnancy or birth, or in your current pregnancy, you may be advised to have what’s called a planned or elective caesarean, or a planned repeat caesarean.

If you were planning to give birth vaginally, but complications during labor or birth mean that you’re advised to give birth by caesarean, you’ll have what’s called an unplanned or emergency caesarean.

Here are some reasons why doctors may opt for a planned or emergency caesarean, rather than a vaginal birth: