Ex-Royal Engineer, 27, given weeks to live as a teenager is finally diagnosed with brain tumor - freetxp Skip to content

An ex-Royal Engineer given weeks to live as a teenager was finally diagnosed with a brain tumour five years later.

Ben Robinson, from Gloucestershire, was just 19 years old when he collapsed during an army training camp in 2015.

Scans revealed ‘pin-head’ lesions in his brain, which doctors said were tumours and gave him weeks to live.

But after further tests, confusion ensued as Mr Robinson was re-diagnosed with epilepsy, and prescribed five years of medication to stop the seizures.

The spasms kept returning, however, and gradually became stronger until one in September 2020 prompted doctors to run the scans again. These revealed the lesions were now as large as ‘golf balls’, leading them to change the diagnosis again to brain tumours.

Mr Robinson, now 27, was discharged from the army and underwent an operation where 90 per cent of one tumour was removed. Two others have been deemed inoperable due to their position. He will receive chemotherapy until August.

Epilepsy is a known warning sign of brain tumours, but it can also be triggered by ‘mis-wiring’ in the brain. Doctors have confirmed Mr Robinson never had it.

Treatment focuses on surgery and chemotherapy but because the tumour grows into the brain it is hard to remove completely. About half of sufferers do not survive beyond 64 years old. 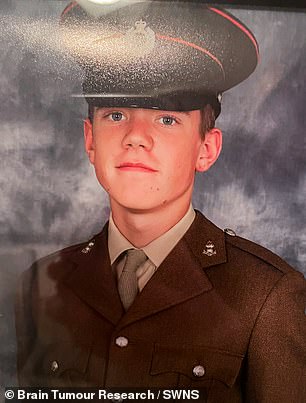 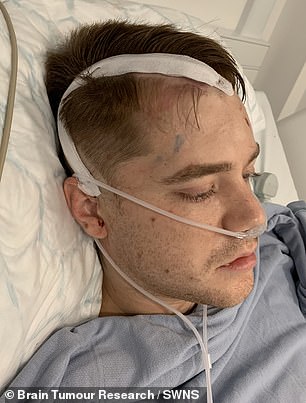 Ben Robinson, from Gloucestershire, was diagnosed with epilepsy after a seizure when he was 19 years old. But doctors re-diagnosed him five years later with brain cancer. He was discharged from the army and is now receiving treatment (right) 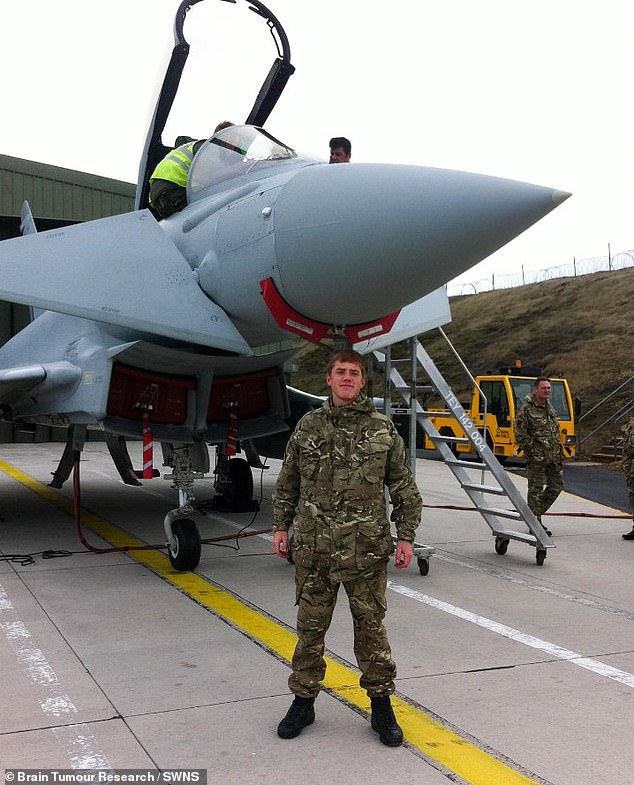 Mr Robinson, pictured above, served tours in Kenya and the Falklands. Doctors had said he had a deadly brain cancer when he was 19 years old, but revised that diagnosis within a week 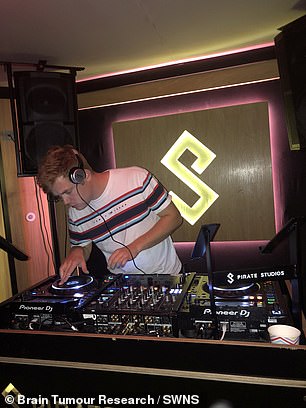 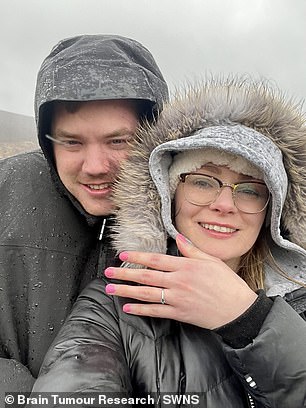 He now works as a part-time DJ and recently got engaged to his partner Kelly White, 28, who is a personal assistant. The pair plan to go traveling before getting married

Mr Robinson said it was a ‘big relief’ when doctors first ruled out the cancer in 2015.

‘For about a week I thought I didn’t have long to live so when doctors said it was epilepsy, that was a big relief,’ he said.

‘The lesions were initially described as “birth marks” on my brain and started off the size of a pinhead.

Oligodendrogliomas are a type of brain tumour that belongs to a group of tumours called gliomas.

The tumours make up between two and five per cent of all brain tumours, according to The Brain Tumor Charity.

They develop from the cells that make up the fatty covering of nerve cells and are most common in people aged 40 to 60.

Brain Tumor Research, a UK-based charity, says radiation is one of the most well-known risk factors for brain tumours.

And it adds on its website: ‘No specific products or chemicals have been identified as being a direct cause of brain tumours.’

Cancer Research UK figures show there are around 11,500 brain tumours diagnosed across the home nations each year.

‘By the time I had surgery, they were huge in comparison, the size of golf balls.’

Speaking about the diagnosis, he said: ‘It’s hard to get your head round being told you have a brain tumour, let alone being given a limited amount of time to live.

‘I have learned to accept it and I’m at peace with it.

‘It puts things into perspective and has encouraged me to use my positive mindset to help others who are struggling with their own diagnosis and mental health in general.’

Mr Robinson was discharged from the army in 2020 on medical grounds after serving tours in Kenya and the Falklands.

He now works as a part-time DJ, and will take to the decks in Cheltenham this month for a charity fundraiser supporting people with brain cancer.

Mr Robinson has also proposed to his partner Kelly White, 28 and a personal assistant. The couple plan to go traveling before getting married.

After his seizure at Chilwell barrcks, Nottinghamshire, doctors eventually diagnosed him with a form of epilepsy called cortical dysplasia.

The condition occurs when connections between some brain cells did not form properly in the womb, leading to seizures.

It is normally diagnosed by the time someone is 16 years old, but in rare cases it may not be detected until adulthood.

Scans at Southmead Hospital, Bristol, revealed that Mr Robinson had the cancer. After the surgery he received radiotherapy for three months, and is now undertaking a year of chemotherapy.

Describing the diagnosis, Mr Robinson said: ‘I’m lucky to have the people I do around me. Everyone is supportive and has stuck with me throughout my diagnosis.

‘Kelly and I are excited about our life together and can’t wait to get married.’ 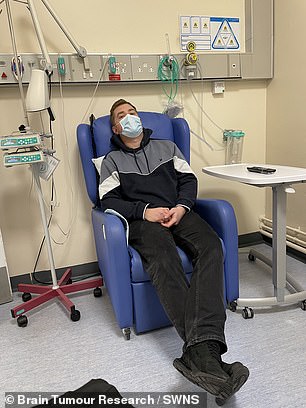 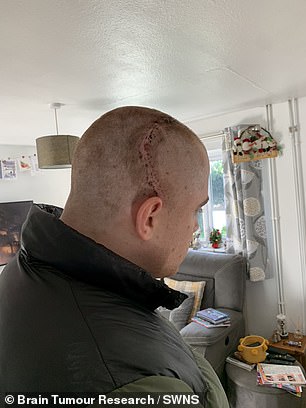 Mr Robinson is pictured above in hospital during his treatment (left), and after being discharged following surgery (right) 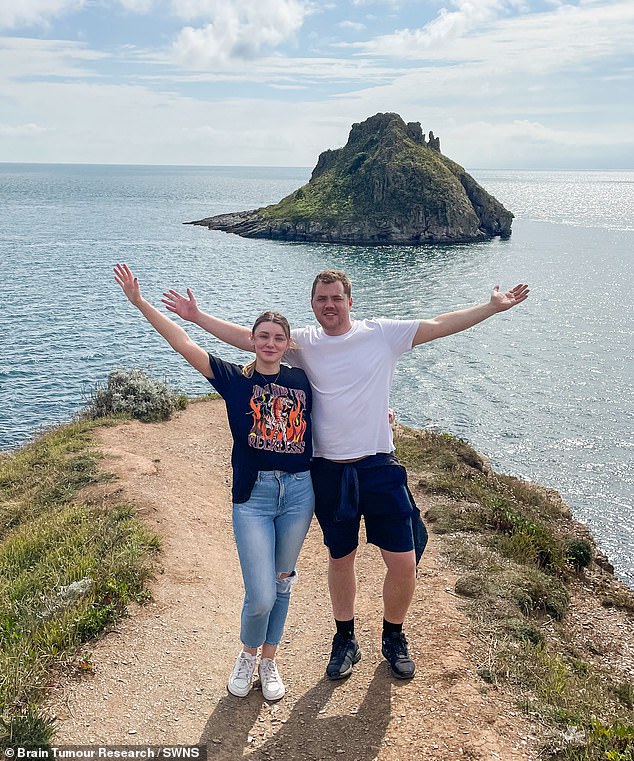 Mr Robinson and his partner are pictured together above on holiday. They plan to travel more together before getting married

Up to 200 guests are expected for the fundraiser organised by Brain Tumor Research as part of its ‘Wear A Hat’ day campaign.

The event — which gets attendees to wear their favorite hat — is now in its 13th year and has raised more than £2million for brain cancer research.

Mel Tiley, community development manager at Brain Tumor Research, said: ‘We wish Ben well in his ongoing treatment and are grateful to him for sharing his story.

‘The effort that Ben and Kelly are going to for their fundraising event is fantastic, especially as he is going through chemotherapy treatment at the same time.

‘Ben’s story reminds us of the indiscriminate nature of this awful disease.’