Popular ‘meal deals’ sold by high street giants can contain up to 80 per cent more salt than a Big Mac and fries from McDonald’s, campaigners warned today.

Subway, Boots, Tesco and the Co-op are among the country’s worst offenders, selling sandwich, snack and drink lunch combinations that exceed 4g of salt.

For comparison, a Big Mac and medium fries contain 2.92g of salt.

The NHS advises adults to limit themselves to 6g of salt per day – the equivalent of one teaspoon – because too much can raise blood pressure, increasing the risk of heart disease and stroke.

Action on Salt, who analyzed meal deals sold at eight chains, today called on the Government to enforce strict salt reduction targets and fine companies that fail to comply.

The campaign group, based at Queen Mary University of London, also claimed almost a third of snacks offered as part of meal deals contain ‘far too much salt’. Nearly three-quarters are ‘dangerously high’ in saturated fat, salt and sugar, it said.

One in three Britons are thought to buy meal deals – which can cost as little as £ 3 – at least twice a week, so the findings are ‘deeply concerning’, the campaigners said.

They warned people could consume their maximum daily recommended salt intake ‘in just one meal without even knowing it’ and retailers ‘appear to have forgotten that salt is a killer’. 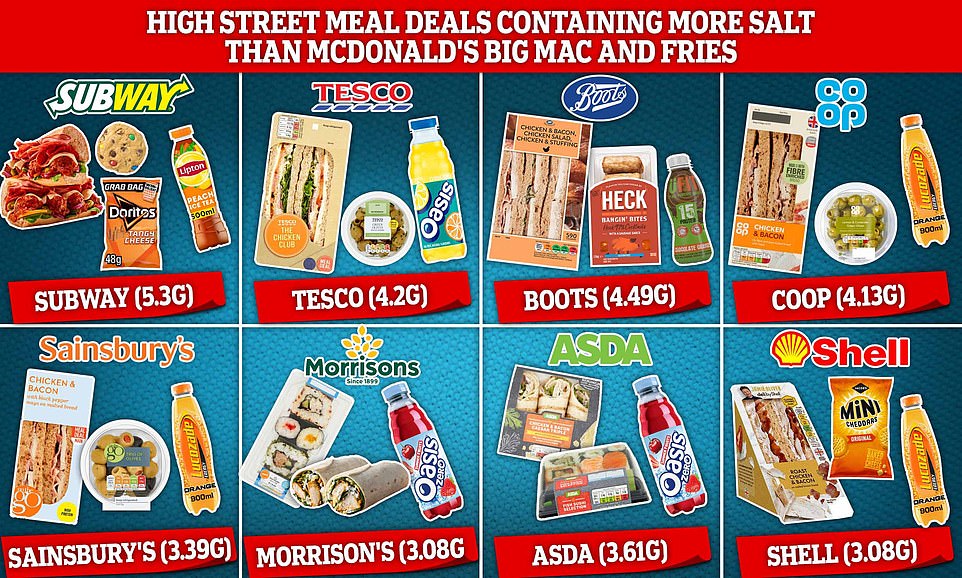 Popular ‘meal deals’ sold by high street giants can contain up to 80 per cent more salt than a Big Mac and fries from McDonald’s, campaigners warned today. Action on Salt’s findings was based on analysis of 533 products available at Subway, Boots, Tesco, Co-op, Asda, Sainsbury’s, Morrison’s and Shell (pictured) 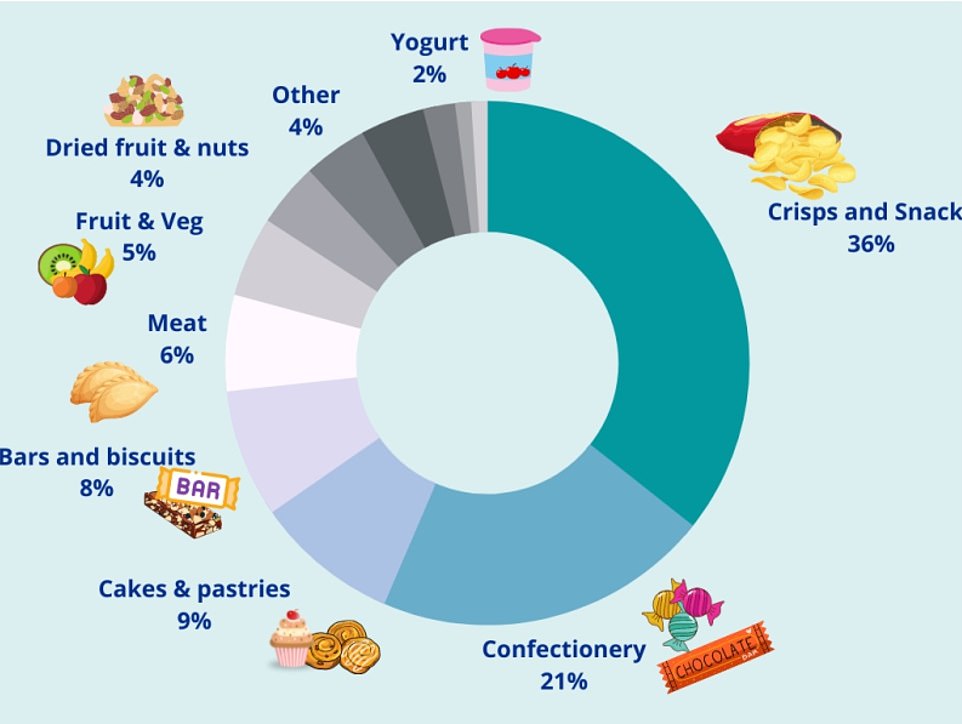 The Queen Mary University of London researchers found crisps and confectionery products dominate meal deal snack offerings, equating to 36 per cent and 21 per cent, respectively. For comparison, fruit and vegetables account for only 5 per cent across all eight shops they analyzed

HOW MUCH SALT SHOULD I EAT?

Eating too much salt can increase blood pressure and the risk of heart disease and stroke.

Adults should eat a maximum of 6g of salt per day.

Between 75 and 80 per cent of the salt people eat is in processed and convenience foods, such as sauces and meat.

For every gram of salt cut from Britons’ average daily intake, there would be 6,000 fewer deaths from strokes and heart attacks per year.

Most labels now give the amount of salt contained in food per serving.

Foods are considered to be low salt and have a green label if they contain less than 0.3g per 100g.

Products with medium salt levels have less than 1.5g per 100g, which is indicated through an amber label.

And products with high amounts of salt have a red label, meaning they contain 1.5g per 100g or 1.8g per portion.

Action on Salt’s findings was based on analysis of 533 products available at Subway, Boots, Tesco, Co-op, Asda, Sainsbury’s, Morrison’s and Shell.

Subway’s deal, which would cost £ 7, was the only combination to contain two snacks.

The researchers found the olives were the saltiest snack on offer across any meal deal offerings, containing 2.02g per pack. This equates to five servings of salted peanuts, or a third of an adult’s maximum daily recommended salt intake.

Sheena Bhageerutty, assistant nutritionist at Action on Salt, said: ‘Without a doubt, meal deals are hugely popular especially amongst the nation’s workforce looking for a convenient and “value for money” lunch.

‘Yet unbeknown to many consumers, these meal combos and snacks are often exceedingly high in salt which means an adult can consume their maximum daily recommended salt intake in just one meal without even knowing it.

‘Rather than trying to “upsell” us on salt, saturated fat and sugar, CEOs of food retailers must act more responsibly by setting strict internal standards including only healthier snack options as part of the “deal”.’

Action on Salt’s analysis also found that a third of all snacks available as part of high street meal deals are ‘far too high in salt’ in comparison to Government salt targets.

The 2024 deadline for the targets set out maximum salt levels for different foods, including meat products, bread and snacks.

They aim to gradually reduce the levels of salt in the food contributing most salt to our diets by setting maximum levels for 76 categories of food and drink.

But 30 per cent of meal deal snacks exceed their maximum salt target set out in the Government’s plans, Action on Salt found.

Snacks with the most salt include Cornish pasties, sausage rolls and Jacob’s mini cheddars.

Asda and Subway were the worst offenders, with 82 per cent of snacks available in their promotions classified as HFSS.

The group said no retailer stood out for offering healthier options. However, Sainbury’s is the ‘best of a bad bunch’ and offers a higher proportion of non-HFSS snacks.

The team said crisps and confectionery products make up 57 per cent of meal deal snack offerings, while fruit and vegetables account for only 5 per cent.

The researchers called on the Government to enforce salt reduction targets on retailers and push ahead with plans to limit buy-one-get-one-free deals and ban junk food adverts before 9pm.

Meanwhile, retailers should reduce salt in their items and increase the proportion of healthy products they offer, while consumers should read nutrition labels and select foods with lower salt.

Sonia Pombo, campaign manager for Action on Salt, said: ‘Despite the overwhelming impact on health, many companies appear to have forgotten that salt is a killer.

‘These findings are well and truly shocking, especially given the vast amount of people that purchase these meal deals on a regular basis.

‘In order to shift our food choices to healthier products, we need food companies to provide us with better, healthier and more affordable options.

‘Now is the time for the food industry to act and improve the nutritional quality of the foods they sell, and if they can not do it voluntarily, then the Government must step in and legislate, for the benefit of our health.’

A spokesperson for Sainsbury’s said it is working towards increasing healthy product sales and cutting salt targets.

A Co-op spokesperson said 94 per cent of its own brand products meet 2024 salt targets and its meal deal snack options include healthy products.

A spokesperson for Subway said its chain offers a range of meal deal choices and gives customers ‘the information they need to make better choices’.

Some 96 per cent of Subway’s meal deals are ‘already below the limits and we will be fully compliant by 2024’, they added.

A Tesco spokesperson said the supermarket has ‘worked hard’ to reduce the salt content in its own brand foods and offers ‘a wide selection of healthy options’ which allows customers ‘to make healthier choices’.

Action on Salt in January recognized Tesco as ‘the most successful retailer at reducing salt in its meat and poultry products’, they added.

An Asda spokesperson said: ‘We offer customers a wide selection of snacks in our Food to Go range including healthy options such as vegetables, protein-based snacks, fruit pots and yogurts.’

Meals should be based on potatoes, bread, rice, pasta or other starchy carbohydrates, ideally wholegrain, according to the NHS

• Base meals on potatoes, bread, rice, pasta or other starchy carbohydrates, ideally wholegrain

• 30 grams of fiber a day: This is the same as eating all of the following: 5 portions of fruit and vegetables, 2 whole-wheat cereal biscuits, 2 thick slices of wholemeal bread and large baked potato with the skin on

• Eat some beans, pulses, fish, eggs, meat and other proteins (including 2 servings of fish every week, one of which should be oily)

• Choose unsaturated oils and spreads and consuming in small amounts