Billionaire hedge funder Bill Ackman has claimed that ‘WWIII has likely started already’ and predicted that a broader military conflict with Russia may be inevitable after Vladimir Putin launched an invasion of Ukraine.

Ackman, who has a long track record of making alarmist predictions, often as he is betting against the markets, issued his dire forecast in an extremely long series of tweets on Saturday.

‘In January 2020, I had nightmares about the potential for a pandemic, but everyone seemed to think I was crazy. I am having similar nightmares now,’ he wrote.

Ackman famously appeared on CNBC in the early days of the COVID-19 pandemic in March 2020 and declared that ‘hell is coming’, calling for a 30-day national lockdown.

It later emerged that his firm, Pershing Square Capital, made $2 billion by betting against stocks that tanked as he delivered his doomsday predictions.

Now, however, Ackman warns ‘WWIII has likely started already, but we have been slow to recognize it.’ 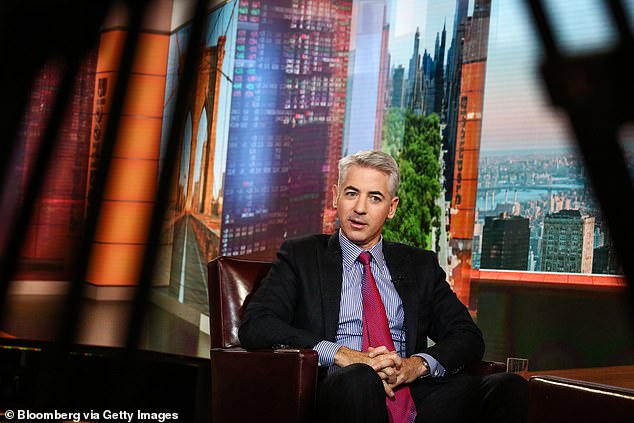 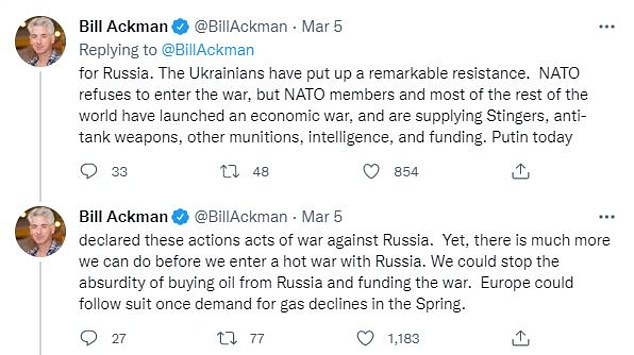 ‘Putin has invaded Ukraine and it is not going well for Russia,’ he continued.

‘The Ukrainians have put up a remarkable resistance. NATO refuses to enter the war, but NATO members and most of the rest of the world have launched an economic war, and are supplying stingers, anti-tank weapons, other munitions, intelligence, and funding.

‘Putin today declared these actions acts of war against Russia. Yet, there is much more we can do before we enter a hot war with Russia,’ wrote Ackman.

Ackman called for a Western embargo against Russian oil, a step that the White House is now considering.

He also said that the US should provide Ukraine ‘our best weaponry and more of it’ and argued that fears of provoking Putin into nuclear war were tantamount to appeasement.

‘Because Russia is a nuclear power and Putin is a madman, we say we can’t intervene in the Ukraine. What then do we do when he wants more?’ wrote Ackman.

‘The nuclear threat is no different when he takes his next country, whether it is part of NATO or not, and by then we are strategically worse off. He has made his ambitions publicly known,’ he continued. 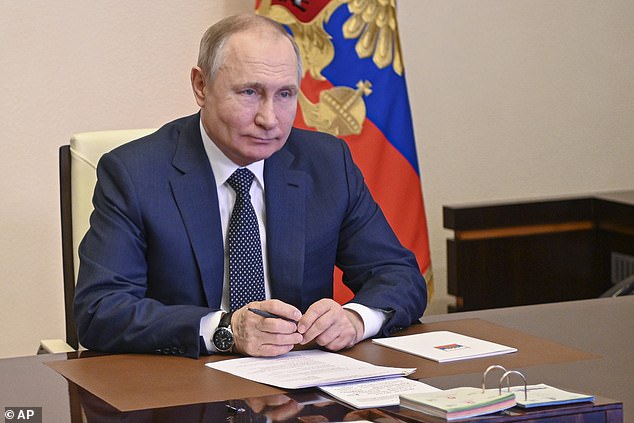 ‘We let Putin occupy Georgia and Crimea with little pushback. And his aspirations only got larger because we did nothing to stop him,’ wrote Ackman 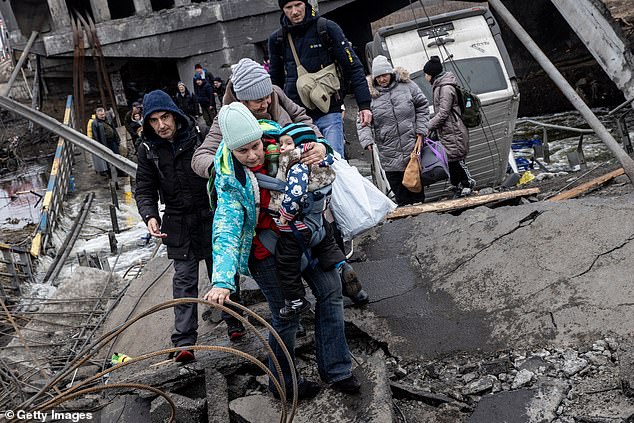 Residents of Irpin flee heavy fighting via a destroyed bridge as Russian forces entered the city on March 07, 2022 in Irpin, Ukraine. Russia continues its assault on Ukraine’s major cities 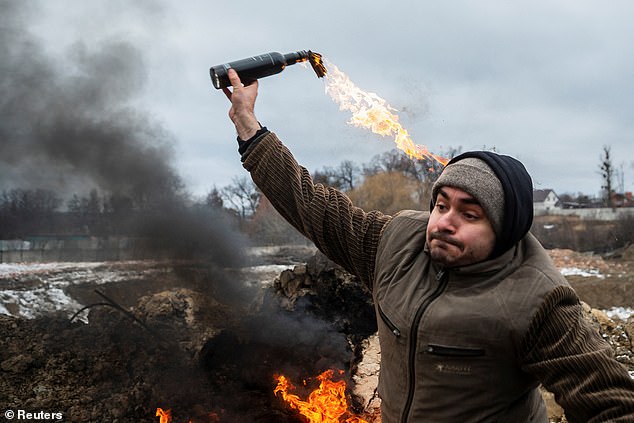 A civilian trains to throw Molotov cocktails to defend the city, as Russia’s invasion of Ukraine continues, in Zhytomyr, Ukraine

‘We let Putin occupy Georgia and Crimea with little pushback. And his aspirations only got larger because we did nothing to stop him,’ the billionaire wrote.

‘Are we now going to let him take the Ukraine? We are in the early innings of Putin’s global aspirations. With each ‘victory,’ he is emboldened to take more. He is testing us, and we are failing the test each time,’ he added.

Ackman went on to call for the imposition of a no-fly zone over Ukraine, a step that faces bipartisan opposition in Washington, and which NATO has rejected.

A no-fly zone would require shooting down Russian aircraft to enforce, and Putin has said explicitly that he would consider any country that tries to enforce a no-fly zone a party to the conflict.

Ackman argued that by declining to directly defend Ukraine, which is not a NATO member, the West is giving Putin ‘carte blanche to invade and subjugate’ other European countries that are not part of NATO, including Sweden, Finland, Cyprus, Ireland, Austria , Malta, and Switzerland.

The hedge funder then took his argument to new extremes, comparing Putin’s invasion of Ukraine to Adolf Hitler’s systematic genocide of Jewish people. 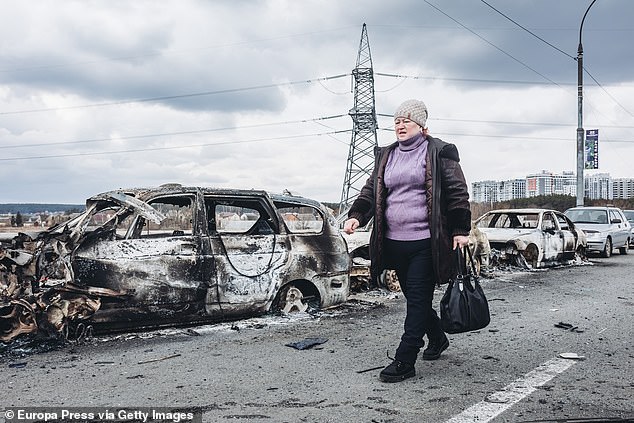 A woman walks in front of burned cars on a bridge in Irpin, on March 7, 2022, in Irpin, Ukraine. The Ukrainian army is resisting for the moment the heavy Russian siege in some of its cities 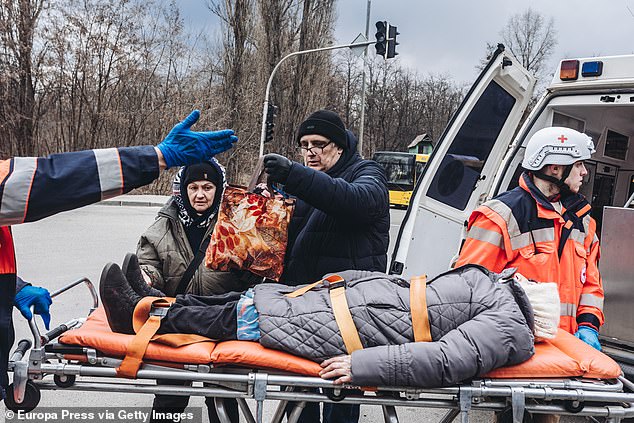 An elderly woman is carried by ambulance on March 7, 2022, in Irpin, Ukraine

Ackman said that the only way he saw to avoid a broader conflict is if China steps in and brokers a peace settlement.

‘It appears that China gave Putin the node to attack Ukraine. Putin respects and likely fears China. China can elevate itself on the world stage by helping to resolve this crisis,’ he wrote.

On Monday, Ukrainian officials said a Russian air strike hit a bread factory in northern Ukraine on Monday, killing at least 13 civilians, while talks between Kyiv and Moscow made little progress towards easing the conflict.

The strike on the factory in Makariv, just west of the capital Kyiv, took place as the number of refugees fleeing across borders passed from the Russian assault on Ukraine 1.7 million, according to United Nations figures.

Russian forces pressed on with their sieges and bombing of Ukrainian cities on the 11th day of the war. In the encircled southern port city of Mariupol, hundreds of thousands of people remained trapped without food and water under regular bombardments. 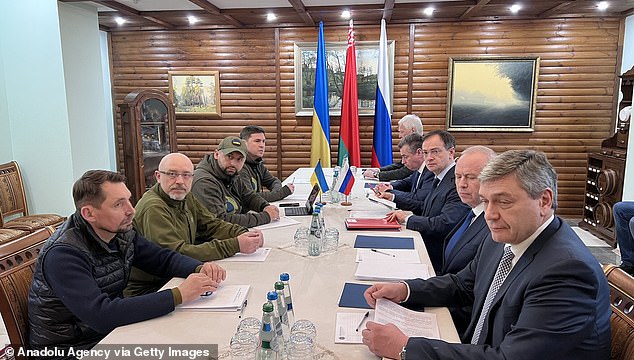 Ukrainian (left) and Russian (right) officials took part in peace talks in Brest, Belarus, this afternoon. From left to right: Ukraine’s deputy minister of foreign affairs Mykola Tochytskyi, minister of defense Oleksiy Reznikov, head of the Ukrainian servant of the people faction Davyd Arakhamia, adviser to the head of the office of the president Mykhailo Podoliak. On the Russian side, from left to right, Russian Ambassador to Belarus Boris Gryzlov, chairman of the Russian State Duma’s International Affairs Committee Leonid Slutsky, presidential aid and the head of the Russian delegation Vladimir Medinsky, deputy minister of defense Alexander Fomin, and deputy foreign minister Andrei Rudenko

‘They’re bombing the life out of everything that is moving,’ Ukranian President Volodymyr Zelenskiy said.

It was not immediately possible to verify the reported bakery attack, but local emergency services said the bodies of at least 13 civilians were recovered from rubble after it was hit.

Five people were rescued of the 30 believed to have been there at the time. Russia denies targeting civilians.

Zelenskiy, speaking on a zoom call with a Jewish group in the United States, said: ‘The bakery was eliminated. And this is happening in different cities.’

In the eastern city of Kharkiv, police said a further 10 people had been killed over the past day, taking the total death toll there from Russian bombardment to 143 since the start of the invasion. It was not possible to verify the toll.

After the third attempt to ease the bloodshed at talks in Belarus, a Ukrainian negotiator said that although small progress on agreeing logistics for the evacuation of civilians had been made, things remained largely unchanged.

‘As of now, there are no results that significantly improve the situation,’ Mykhailo Podolyak said in a video statement, while Russian negotiator Vladimir Medinsky, told the talks were ‘not easy’.

‘We hope that from tomorrow these corridors will finally work,’ he said.