President Joe Biden said Tuesday night that Americans’ access to highly effective antiviral Covid pills will be increased under a new ‘Test to Treat’ plan being rolled out by the federal government, and that the pills that were once in short supply should soon be readily available available in the US, as officials make a strong push to put the pandemic in the rear view. 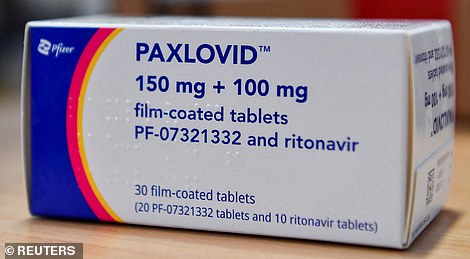 Paxlovid, an antiviral Covid pill manufactured by Pfizer, will now be available at US pharmacies for anyone who tests positive to receive for free, the President announced Tuesday (file photo)

Speaking to congress at the State of the Union adress, the President announced that the country had increased its purchase order of Pfizer’s Paxlovid from 10 million to 20 million courses. The drug, which received authorization from the Food and Drug Administration (FDA) late last year, has been determined as the most effective post-infection treatment but the company has reportedly had issues with production.

‘If you get COVID-19, the Pfizer pill reduces your chances of ending up in the hospital by 90 percent,’ Biden said.

‘I’ve ordered more pills than anyone in the world has. Pfizer is working overtime to get us a million pills this month and more than double that next month.’

With production issues somewhat quelled, and the US soon to have more access to the drug, Biden announced a ‘Test to Treat’ program. Under the new system, any Americans can receive a Covid test at a pharmacy, and if they test positive they will be offered courses of Paxlovid for free. Officials hope this effort could get crucial drugs into the hands of Americans faster, cutting some of the red tape required to get a prescription. 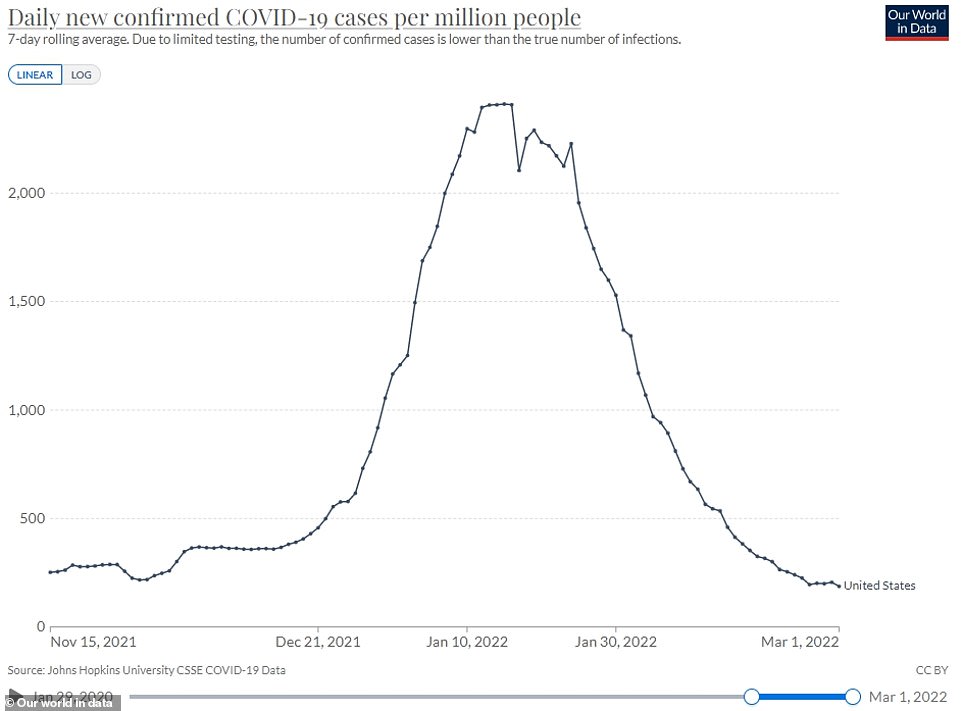 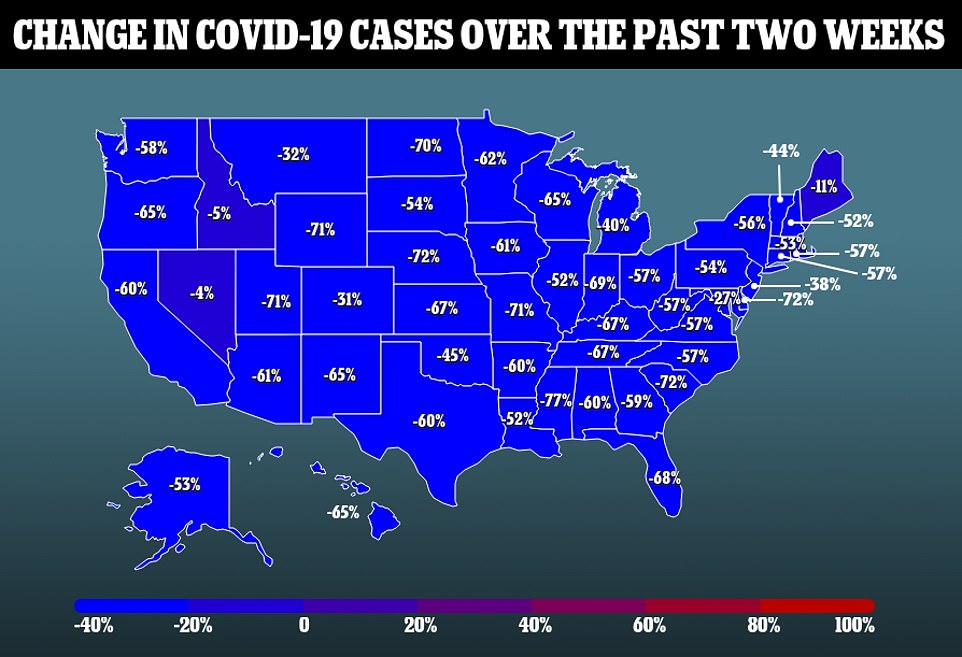 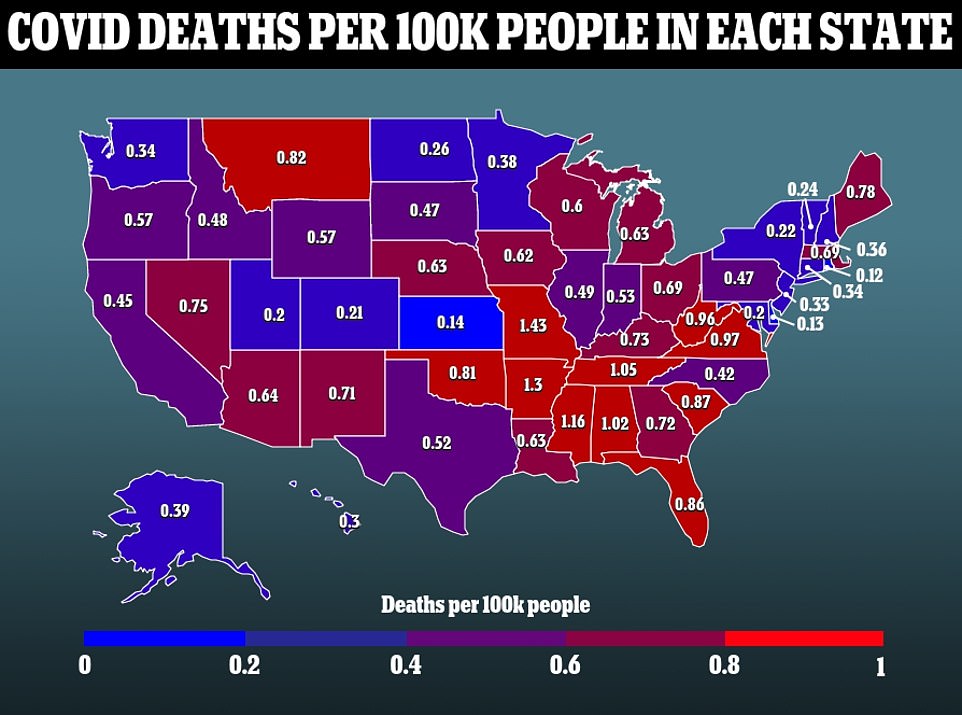 The effort can also lesson the brunt of the pandemic faced by hospitals. Paxlovid is highly effective at reducing hospitalizations caused by the virus if the medication schedule is started early enough in infection. Massive distribution of these pills could free up hospital resources and leave them to only be used on those most at risk from Covid. 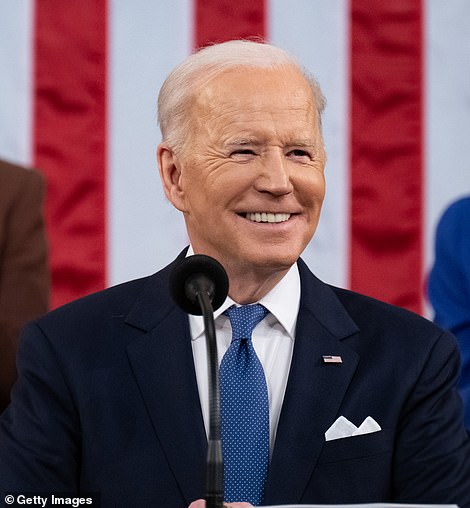 It also matches a change by the Centers for Disease Control and Prevention (CDC) last week, where the agency has shifted focus from preventing overall case transmission to reducing hospitalizations. The CDC revised how it calculates Covid risk in each county – and how it recommends mask orders based on those risks – as the agency will now heavily weigh hospitalization rate and hospital capacity.

This all comes as a larger effort to move beyond the pandemic in America. Cases have plummeted over the past month in a half and Americans are eager to move back to a ‘normal’ life. The nation is currently recording 63,881 new cases per day, a 26 percent drop over the past seven days and a 90 percent fall from the mid-January peak of 800,000 per day.

Americans are highly protected from the virus as well, with official CDC data showing that 88 percent of adults have received at least on shot of a COVID-19 vaccine, and 75 percent are fully vaccinated. The agency also reports that 94.4 million Americans have received a booster.

An AP-NORC survey conducted last month found that only 24 percent of Americans are still very concerned about themselves or someone in their family catching the virus.

‘Thanks to the progress we have made this past year, COVID-19 need no longer control our lives,’ Biden told legislators.

‘We will continue to combat the virus as we do other diseases. And because this is a virus that mutates and spreads, we will stay on guard.’ 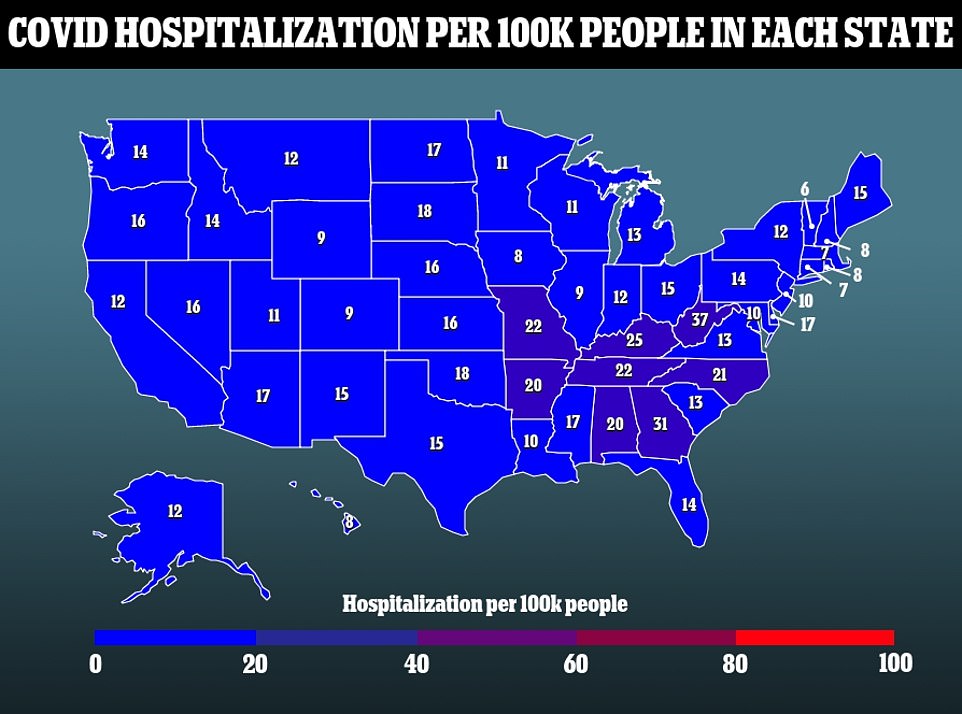 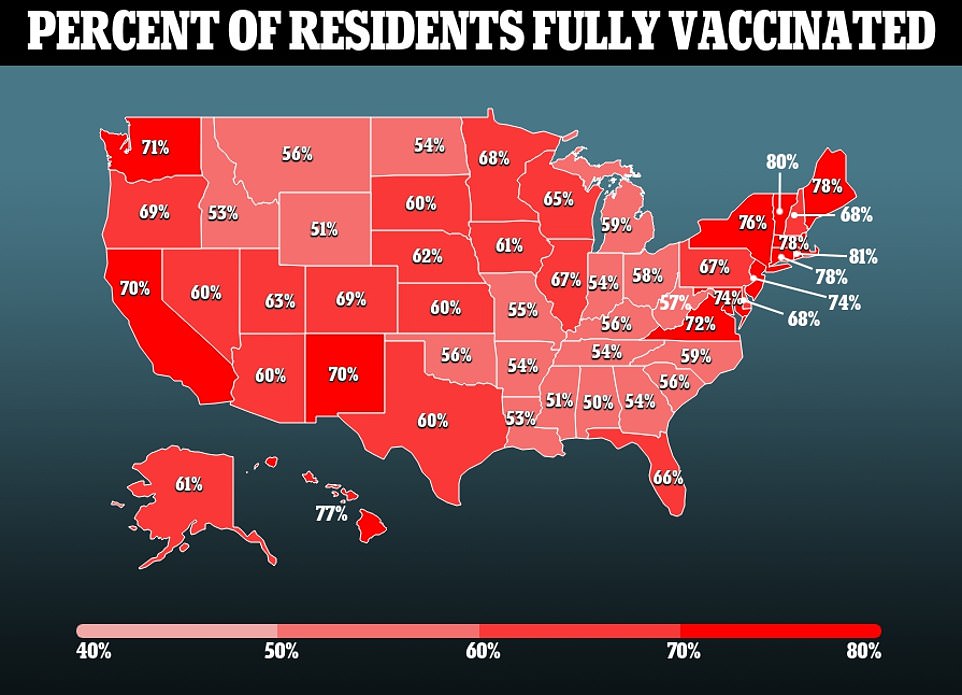 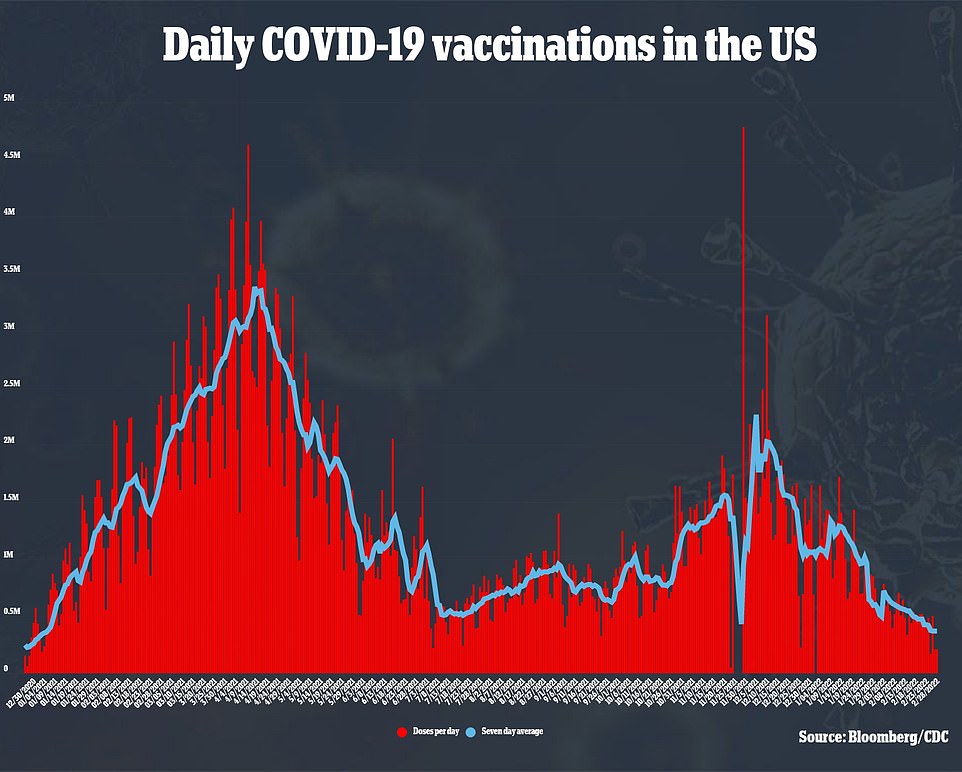 Biden also promised that the federal government would work towards getting variant-specific vaccines out the door faster in case of another highly infectious variant, like Omicron, emerges. The strain, which accounts for virtually every single case in the US according to CDC data, erupted in December, sending vaccine manufacturers to work on developing an Omicron-specific jab.

The variant worked faster than scientists could, though, rampaging through the population before the new vaccines became available. While both Pfizer and Moderna are expected to rollout Omicron-tailored shots late this month, cases will likely be so low by then that there will be little demand.

‘I cannot promise a new variant won’t come, but I can promise you we’ll do everything within our power to be ready if it does,’ Biden said

‘If necessary, we’ll be able to deploy new vaccines within 100 days instead of many more months or years.’

There are questions whether this would even be necessary, though. The US managed to weather the Omicron surge – which will likely be the worst ever – without tailored jabs and instead was carried by natural immunity and the widely available booster shots.

In the present, more and more American cities and states are rolling back Covid restrictions and allowing their citizens to live as normal. Hawaii remains the only state that either still has a mask mandate, or does not have a scheduled day to lift it in the coming weeks. The island state may soon join its peers, though, as officials lifted quarantine requirements for visitors on Tuesday.

New York City, which has had some of the strictest Covid guidelines throughout the pandemic, will even lift vaccine checks and mask mandates starting March 7. The city’s mandate for private employers will still apply, though. 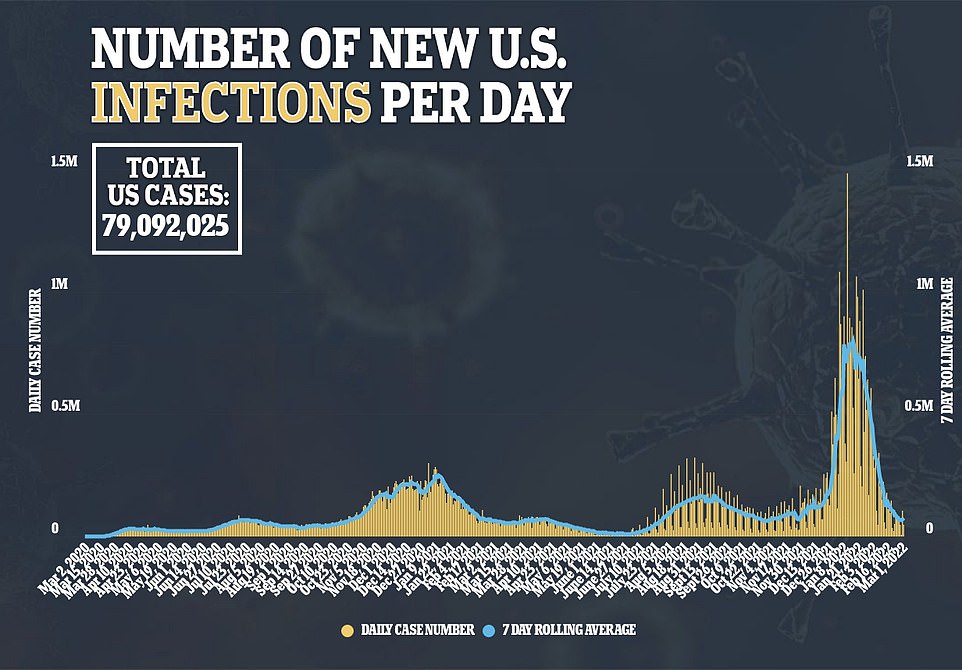 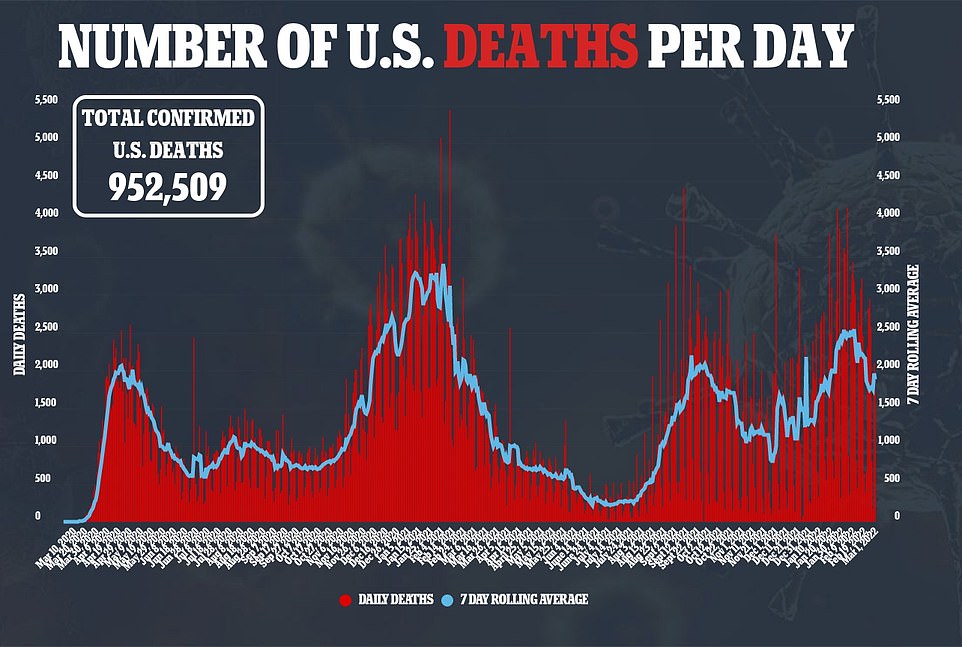